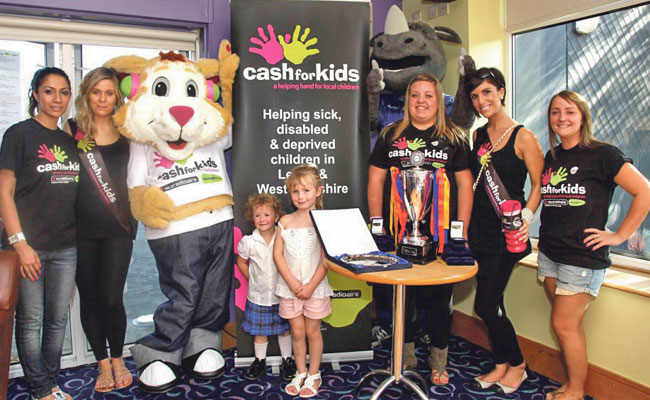 Cash For Kids Across Leeds and West Yorkshire

Cash for Kids is the official charity of Radio Aire & Magic 828. Cash for Kids are unique in the fact that they support individual children, community groups, children’s hospices and other children’s charities across Leeds and West Yorkshire. By supporting Cash for Kids you are actually supporting hundreds of great causes in the local community.

Last year was the most successful year for Radio Aire & Magic 828’s Cash for Kids, raising over £920,000 and supporting over 21,000 sick and deprived local children.

Just some of the organisations that have benefited from Cash for Kids grants are; Martin House Children’s Hospice, who received a grant of £10,000 to refurbish their sensory room. Leeds Children’s Charity, who received a grant of £1,000 to replace toys and games at their Silverdale Holiday Home. Forget Me Not Children’s Hospice, received a brand new Bathing Aid which assists children getting in and out of the bath. Kidz ‘n’ Co community group are going on a trip to Drayton Manor in the summer. Safe Partnership received £2,000 towards production of their Safe DATE (Domestic Abuse Training & Education) material, which is raising awareness of different forms of abuse with teenagers.

Cash for Kids are most well-known for the Mission Christmas campaign. In 2013 they delivered over £828,000 worth of gifts to over 15,300 local children who were at risk of waking up to nothing on Christmas Morning. In addition to Mission Christmas 2013, they also granted four very special Christmas Wishes, which were supported by Simplyhealth and MEARS. Kendal Middleton-Jessop who is currently battling Neuroblastoma, was granted a Fireman Sam themed party to say thank you to all the friends and family who have been fundraising for her treatment abroad. Faith Cooper was diagnosed with Parkinsons Disease in 2013, and Cash for Kids granted her wish to see a Disney performance. Faith went to see Peter Pan at Leeds Arena with her Mum, Gran and older Brother. Michael Windross was diagnosed with Kidney failure a year ago, and at 16 years old he has struggled as he loved to play football. His whole family have been impacted and his wish was granted for the family to have a holiday to Spain and see Barcelona football match. Harvey, Brandon and Sophie’s mother passed away in 2012 aged just 26 years old. The children now live with their Grandma, and all have found it hard adapting to life without mum, and their Grandma especially looking after three children and grieving for the loss of her daughter. Cash for Kids granted their wish, and sent them to London for the weekend, where they saw a West End show and went on the London Eye.

Their newest campaign, Mission Thank You launched on Monday 24th February. Cash for Kids want to take the opportunity to share the power of saying ‘thank you’ as a really positive way to start the year. There are beneficiaries on-air speaking to the breakfast presenter Rich, and they have also done some short videos on the website, to showcase where funds raised have gone. From Monday 3rd March to Friday 14th March Cash for Kids want you to join in and give your own ‘thank you’, do this by visiting our website www.radioaire.com/thankyou. All funds raised will go towards the next grant round, and benefit many more underprivileged, sick or needy children in your community.

Not only are Cash for Kids a grant-giving charity, but they have many high profile events throughout the year, such as; Celebrity Football Match, Skydive, Family Day and many more! Cash for Kids are always holding fundraising events, and rely heavily on the hard work of volunteers. If you would like to get involved please contact the team on 0113 2835529 or email lauren.scarth@radioaire.co.uk

Quote from Lauren Scarth, Charity Executive “Cash for Kids were delighted to partner with Crossgates Shopping Centre at their event on Sunday 23rd February. The Cash for Kids team held a raffle and auction, which raised £497! Those funds will be used in our next grant round at the end of March. It is great to have local companies on board supporting our mission – our mission is to respond to the needs of children in our communities. We aspire to enable all children to live life to the full and to achieve their individual potential. Together, we can make a difference.”

If your company are interested in fundraising and making a difference in your local area, and would like to become a corporate supporter of Cash for Kids, please get in touch.
Follow us on Twitter @cashforkidsaire
Tel 01132835529
Email: lauren.scarth@radioaire.co.uk