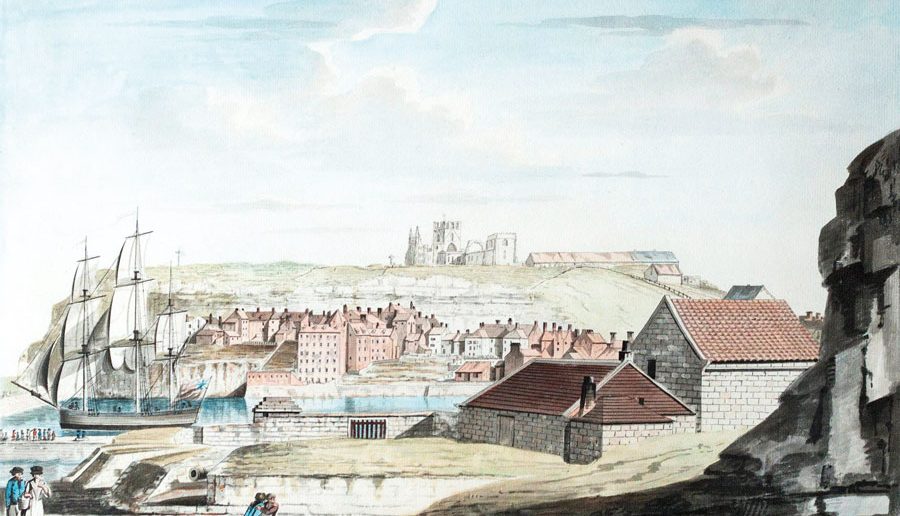 ■ This anonymous painting loaned by the Whitby Museum is dated to the 1767, a decade after Cook left Whitby but a typical 18th century improvement to the town. Image © CCMM/Whitby Museum
Special Features

By yorkshire reporter on 30/05/2018 0 Comments
■ This anonymous painting loaned by the Whitby Museum is dated to the 1767, a decade after Cook left Whitby but a typical 18th century improvement to the town. Image © CCMM/Whitby Museum

Everybody has heard of Captain James Cook, famous for his discovery of Australia. This summer sees the 250th anniversary of his first voyage of discovery, when the great explorer will be celebrated in a programme of nationwide events, including in the fabulous Whitby. In this feature, we look at the life and achievements of this famous Yorkshireman. James Cook was born on the 27th October 1728 in the small village of Marton, just outside Middlesbrough, North Yorkshire. His father was a farm worker originally from Scotland while his mother was a local lass. The second of eight children, James and his family moved to Airey Holme Farm at Great Ayton in 1736 where his father’s boss paid for him to attend the local school. By the time he left school five years later, James’s father had been promoted to farm manager and he began to work for him. At the age of 16, Cook moved to the fishing village of Staithes – 20 miles away from his home, to be the apprentice to grocer and haberdasher William Sanderson. It is surely here where the young lad fell in love with the sea.

Just a year and a half later, realising that he was not cut out for shop work, Sanderson sent Cook to his friends in Whitby – ship owners in the coal trade. The Walker family employed him as a merchant navy apprentice and he spent the next few years plying coal between the Tyne and London along the English coast. Part of his apprenticeship involved studying astronomy, navigation as well as mathematics such as algebra, geometry and trigonometry – all skills he would draw upon later in his career.

Following his three-year apprenticeship, Cook began working in the Baltic Sea aboard trading ships, and upon the passing of his exams in 1752 he progressed quickly through the rankings, beginning with promotion to Mate that same year aboard collier brig Friendship. In 1755 he was offered command of this ship, but instead volunteered for service in the Royal Navy, at a time when it was getting ready for what would become the Seven Years’ War. Cook knew that he would need to begin again at the bottom of the hierarchy but would advance far quicker in military service.

Cook’s first posting was with HMS Eagle, serving as able seaman and master’s mate. In autumn 1755 he took part in the capture and sinking of two French warships after which he was promoted to boatswain. Eighteen months later he passed his master’s exams and joined HMS Solebay as master. During the Seven Years’ War, Cook served aboard HMS Pembroke in North America, taking part in the major assault to capture the Fortress of Louisbourg from the French, and the siege of Quebec City. During these campaigns, a talent for surveying emerged and he was largely responsible for mapping the entrance to the Saint Lawrence River during the siege which allowed General Wolfe to make his famous stealth attack during the Battle of the Plains of Abraham in 1759.

Aboard HMS Grenville in the 1760’s, Cook’s surveying skills were also put to use mapping the treacherous coast of Newfoundland. The first large scale accurate maps he produced of the area over the duration of five seasons brought him to the attention of the Admiralty and Royal Society, and were used well into the 20th century.

Despite all this hard work, James Cook still found the time to marry Elizabeth Batts in December of 1762, and the couple went on to have six children together. Regardless of this large family, Cook has no direct descendants as all his children died before having families of their own. One son Nathaniel was lost aboard HMS Thunderer during a hurricane in the West Indies.

In 1766, James Cook was engaged by the Admiralty to command a scientific voyage which he would become famous for. He was to observe and record the path of planet Venus as it moved across the sun – a rare event which was only visible in the southern hemisphere. He was promoted to lieutenant in order to take command and was also granted a 100-guinea fee by the Royal Society as well as his standard Naval pay. In addition to the publicised reason for the expedition, a more secretive motive was to search for the fabled southern continent.

Cook set sail on the 26th August 1768 aboard the Whitby built HMS Endeavour, accompanied by scientific men such as astronomer Charles Green and botanist Joseph Banks. The ship arrived in Tahiti in April 1769 where Green observed the transit of Venus, although the results were not as accurate as England had hoped. Cook then opened the sealed orders – those telling him to search the South Pacific Ocean for the southern continent of Terra Australis. He sailed to New Zealand and mapped the entire coastline, before heading west to reach the south-eastern coast of Australia on 19th April 1770. This arrival marked the first recorded encounter by Europeans to the coastline.

Just four days later Cook recorded his first observations of indigenous Australians at Brush Island near Bawley Point. His journal reads ‘and were so near the shore as to distinguish several people upon the sea beach they appear’d to be of a very dark or black colour but whether this was the real colour of their skins or the clothes they might have on I know not.’

On the 29th April, they made landfall on the mainland at Kurness Peninsula, which Cook originally named ‘Stingray Bay’ before changing his mind to ‘Botany Bay’ after unique specimens were collected by botanists Joseph Banks and Daniel Solander. In this place, Cook made first contact with the aboriginal tribe Gweagal. The ship moved steadily northwards over the next month or so, until the Endeavour ran aground on the Great Barrier Reef on the 11th June. They were delayed for around seven weeks while repairs were carried out, then the voyage picked up again and they landed on Possession Island on the 22nd August. Here, Cook claimed the explored coastline as British territory, naming it New South Wales. He and his crew then sailed for home, arriving in July 1771.

When James Cook arrived home his journals were published. Within the scientific community he became something of a hero, but the public were more enamoured with Joseph Banks. Cook’s son George was born and five days later he was sailing off on his second voyage.

Even though the whole eastern coast of Australia had been charted on the first voyage, Terra Australis was situated further south according to the experts of the Royal Society. This time, Cook commanding HMS Resolution, accompanied by HMS Adventure sailed to the extreme south. The expedition became one of the first to cross the Antarctic Circle on the 17th January 1773, although they didn’t quite make it to the mainland of Antarctica due to the cold.

Despite being given an honorary retirement upon his return from this second voyage, enjoying being wined and dined by men of great importance and receiving the Copley Gold Medal for not losing a single man to scurvy, Cook could not bear to be away from the sea and so accepted a third voyage – this time to find the Northwest Passage. Sadly, this would be the last journey that the now Captain James Cook would make.

He set sail once more aboard the HMS Resolution and became the first European to begin formal talks with Hawaii. He made landfall in Kauai in January 1778, naming the islands the ‘Sandwich Islands’ after the fourth Earl of Sandwich and acting First Lord of the Admiralty at the time. From there he travelled north and mapped most of the north west coastline of North America in just the one visit. By September 1778 Cook was headed back towards the Hawaiian Islands. It is suspected that he began to suffer from stomach problems which may have led to increasing irrational behaviour towards his crew. He arrived at Hawaii during their harvest festival of Makahiki and stayed for a whole month.

A man who sailed on Resolution with him, David Samwell, remembered him as ‘A modest man, and rather bashful; of an agreeable lively conversation, sensible and intelligent. In temper he was somewhat hasty, but of a disposition the most friendly, benevolent and humane. His person was above six feet high; and, though a good-looking man, he was plain both in dress and appearance….’

Shortly after leaving to resume exploration of the north Pacific, the Resolution’s foremast broke and they were forced to return to the islands for repairs. It was then that relations began to turn sour for some reason and several arguments broke out between the crew and the islanders. One evening, a group of Hawaiians took one of Cook’s small boats and the incident swiftly escalated with him trying to kidnap and ransom the King of Hawaii. This proved to be fatal for Cook and on the 14th February 1779, he was attacked on the beach by the villagers before being stabbed by one of the king’s attendants, Nuaa.

Despite the soured relations, many people of Hawaii still held Cook in high esteem and Cook’s body was prepared according to the local rituals of the time reserved for chiefs and important elders. His remains were eventually returned to his crew for burial at sea.

Today, a statue of James Cook stands in Waimea, Kauai commemorating his first contact at the town’s harbour in January 1778.

The Captain Cook Festival in Whitby is a celebration of the 250th Anniversary and takes place from the 6th – 8th July. The weekend is set to be great fun for the whole family.

Maritime adventurers can step back in time and climb aboard the Tall ship ‘Atyla’ to experience life at sea, retrace Captain Cook’s voyages on board the replica HMS Endeavour and re-live the Battle of Trafalgar on the smallest ship in Nelson’s fleet, the replica warship topsail schooner, HMS Pickle.

Cllr Helen Mallory, Scarborough Borough Council Deputy Leader says: “The council is proud to be supporting the Captain Cook Festival and working with different community groups to make the event a fitting celebration of Cook’s endeavours and his enduring impact on Whitby. It’s shaping up to be an unmissable weekend for all the family and a fantastic addition to this year’s Yorkshire Coast event calendar.”

Also in Whitby which is well worth a visit all year round is the Captain Cook Memorial Museum. Situated in the 17th century house where Cook lodged as an apprentice, the museum has on display a significant collection of original material relating to him and his associates.

Other events taking place around the country include exhibitions and lectures at The British Library and a release by the Royal Mail of themed stamps.

For more information on the Festival visit;
www.discoveryorkshirecoast.com/whitby/cook250