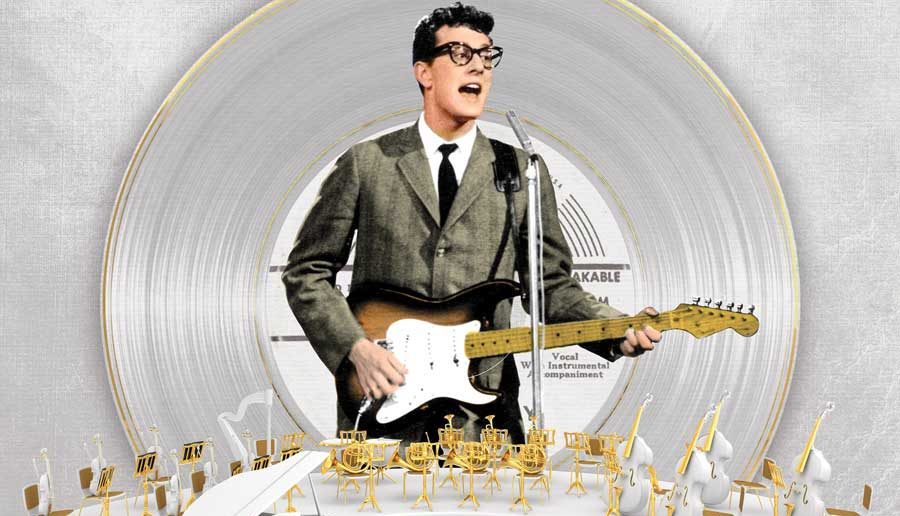 BUDDY BACK IN ALBUM CHARTS 60 YEARS ON

60 years since Buddy Holly first entered the UK album charts, with ‘The Chirping Crickets’ in 1958, the rock and roll pioneer is back in the Top 20, with an album which picks up where he left off at his very last recording session. ‘True Love Ways’, a collection of Buddy’s most beloved hits set to brand new orchestrations, entered the Official UK Album Charts at No.14, placing him above new releases from Fleetwood Mac, Mark Knopfler and Cilla Black. It also marks nearly a decade since Holly’s last Top 20 album.

“What wonderful news! ‘True Love Ways’ entering the UK Top 20 charts is testament to both the timeless quality of the songs and these beautiful interpretations and arrangements”

‘True Love Ways’ is the name of the song Buddy wrote as a wedding gift for Maria Elena, and was recorded 60 years ago at the Decca Studios in New York. This newly-recorded version features his utterly distinctive original vocals and guitar-playing set to new, imaginative arrangements performed by the Royal Philharmonic Orchestra.

Chief Executive of the Official Charts Company, Martin Talbot, comments: “It is a perfect piece of symmetry that 60 years since Buddy Holly scored his first album chart hit with the Crickets in 1958, he is back in the chart with ‘True Love Ways’, an album of sumptuous orchestral recordings of his biggest hits.”

Peter Bradley Snr, Co-founder of The Buddy Holly Educational Foundation says: “A magical time in music revisited. Over sixty years have passed and music from one of the most important albums of the 1950s (The Chirping Crickets) continues to be as relevant and influential as when it was first recorded.”

At his last ever recording session, in October 1958, Buddy used an 18-piece orchestra and the songs produced from that session clearly indicate a new direction for him. Today’s Top 20 album, recorded in London’s Angel Studios, and produced by Nick Patrick, truly reflects Buddy Holly’s love for strings and reminds us why he influenced legendary artists such as The Beatles, The Rolling Stones, Bob Dylan and many, many more. The Yorkshire Reporter has a copy of the album to giveaway.