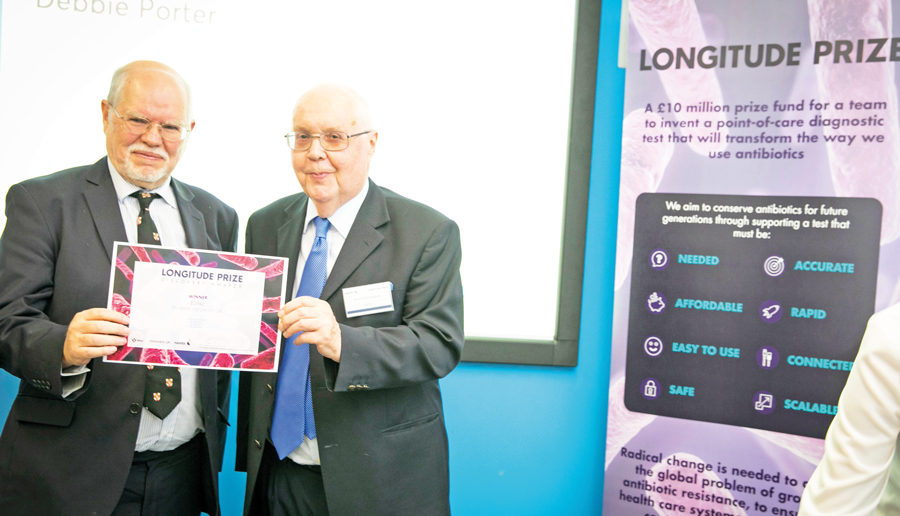 The Longitude Prize, a £10 million five-year prize fund was launched in 2014 with a challenge to develop a point-of-care test to detect and understand infections to help ensure the right antibiotics are used at the right time. Now in its third year, the Longitude Prize will reward a competitor that can develop a point-of-care diagnostic test that will conserve antibiotics for future generations.

A Bradford-based research team, EDPAL, led by Dr Keith Edmondson and Mr Mike Palin has been granted Discovery Award seed-funding to support its bid to develop an accurate point-of-care diagnostic tool to ensure that antibiotics are only used when medically necessary.

A number of potentially life-threatening bacterial infections can be treated if caught early. The development of a rapid diagnostic test to identify whether antibiotics are needed is crucial in addressing the global public health threat from bacteria that can no longer be treated with antibiotics and to help drastically reduce the overprescription of these drugs, safeguarding them for future generations.

Professor Dame Sally Davies, Chief Medical Officer England and Co-convener of the UN Inter-Agency Co-ordination Group on AMR explains:  “Drug-resistant superbugs are already killing hundreds of thousands of people around the world, and this problem is only getting worse. The world is taking notice, and huge strides have been made recently—but tangible action has been far too slow to follow. We need to up the ante. Diagnostics have a key role to play in reducing inappropriate prescribing of antibiotics and in clinical trials of new drugs, I urge people to develop their ideas for diagnostics further.”

Two new research polls commissioned by The Longitude Prize have revealed that patients are now not asking GPs for antibiotics as frequently as in previous years indicating that the recent massive awareness campaigns are having the desired effect. A substantial 83% of people in Yorkshire and Humberside revealed that they trust their GP to accurately diagnose conditions compared to just 78% nationwide. However, there are still widespread misconceptions around antibiotics with almost a quarter of respondents wrongly believing that antibiotics can treat viral infections.

Daniel Berman, Longitude Prize lead at Nesta, the innovation foundation, adds: “The unnecessary over-prescription of antibiotics is one of the major factors in the growth of resistant strains of bacteria. Across the globe we need accurate point-of-care diagnostic tools to maximise the chances that antibiotics are only used when medically necessary and that the right ones are selected. The Longitude Prize now has 250 competitors worldwide all competing to find a cheap and effective diagnostic tool that can be used anywhere in the world to help stem the misuse and overuse of antibiotics.”