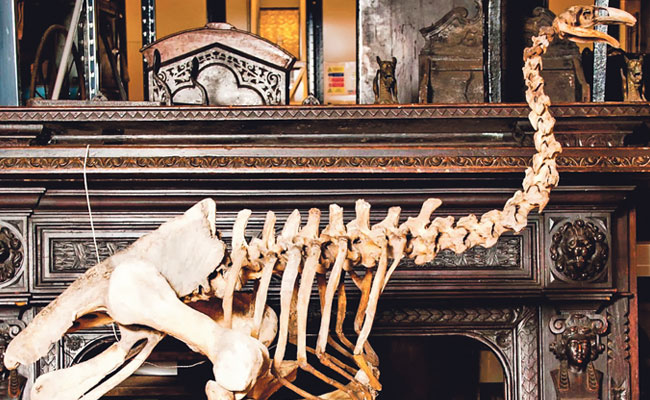 Curators at Leeds Museums and Galleries have uncovered the bones of a lost wonder while looking through their collection at Leeds Discovery Centre. Following restoration work, the skeleton of a large, extinct, flightless bird hailing from New Zealand and one of the largest birds ever to roam the Earth has now being put on display at Leeds City Museum.

The skeleton of the heavy-footed Moa (Pachyornis elephantopus), is part of the Leeds natural history collection which has several specimens of extinct species like the Tasmanian wolf, Great Auk, Dodo and passenger pigeon, many of which are in display in the city museum. This bird standing at an imposing 1.35 metres tall will be available for visitors to view in the Collectors Cabinet at Leeds City Museum from, 3 March.

This follows restoration and conservation work undertaken to repair the skeleton, which was made possible by funding provided by the Leeds Philosophical and Literary Society and the Friends of Leeds City Museum. The skeleton was damaged in 1941 after the Philosophical Museum in the city where it was originally on display, was bombed during World War II.

To ensure the skeleton’s safe transfer from its storage location at the Leeds Discovery Centre to its new home at Leeds City Museum, it has been carefully packed into a custom-built framework. The first Moa bones arrived in England during the 1830s, with a skeleton being acquired in 1868 by the then Curator of the Leeds Philosophical and Literary Society Henry Denny, who arranged the purchase from a London mineral dealer, Bryce Wright.

The most famous Moa specimen can be found at the Natural History Museum in London, which was collected by their first ever Director, Professor Richard Owen. Denny was said to have been in close correspondence with Owen, when aiming to secure the specimen for the city.

Councillor Lucinda Yeadon, Leeds City Council’s executive member for leisure and skills said:
“I am delighted that visitors to Leeds City Museum will have the opportunity to see the imposing skeleton of the now extinct Moa bird, which originally hails from New Zealand.

“The skeleton was originally on display in the city from 1868 until the Philosophical Museum was bombed in 1941 during World War II, and it is fantastic that after restoration work, the Moa bird will once again be on show in Leeds.

“A lot of time and effort has been undertaken to make this ambition a reality, and I would like to thank the Leeds Philosophical and Literary Society and Friends of Leeds City Museum for their enormous support and contributions to this project.”

“We’re so lucky to have such an important specimen in Leeds. When the museum bought it in the mid-19th century there was only one other in the country – at the British Museum, now the Natural History Museum, in London.We’ve loved having it on display in the store at Leeds Museum Discovery Centre and I’m really pleased that we can now – very carefully – move it to go on display at the City Museum.”

“I’d been passing this old, dirty skeleton in our store for ages thinking I must do something with it. It had no label and its skull and legs were missing. Imagine my delight when I discovered that it wasn’t only an extinct Moa but also an important specimen from the Phil and Lit’s original collection. I was thrilled.”

“Specimens of extinct species like this are incredibly important to science as they can tell us much about current threats to species and perhaps understanding how and why these amazing animals became extinct could help us prevent it happening again.

“Having our Moa on display in the city museum I hope will both amaze our visitors and maybe allow them pause for thought about the endless variety and vulnerability of life on earth.”