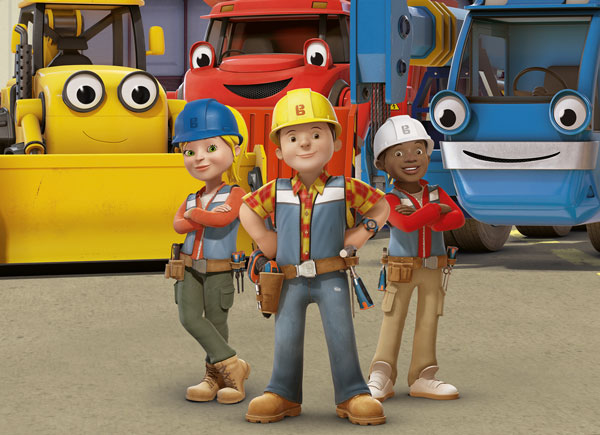 BOB THE BUILDER™ IS BACK WITH BRAND NEW CONTENT BRINGING THE WORLD OF CONSTRUCTION TO LIFE!

Fans of everyone’s favourite construction hero Bob the Builder can now take a first look at the exciting content from the brand new series featuring an all-new look and first-class celebrity voice cast.

Bob the Builder has been entertaining pre-schoolers for the past 16 years with his antics in the seaside harbour town of Fixham, bringing the world of construction to life in an inspiring and meaningful way.

For the upcoming new CGI-animated series launching on Channel 5’s Milkshake from 1st September 2015 at 7.20am, Bob the Builder has been given his biggest re-vamp in the show’s history with a modern look and feel.

The new-look Bob is still the same Bob that audiences know and love though. His dungarees might have been replaced with a hi-vis jacket but his chunky boots, yellow hard hat and checked shirt all remain, ensuring TV’s best-loved builder remains just as recognisable as ever. With his trusty tool belt now jam-packed with all manner of handy kit, Bob is ready to go… No project is too big, no problem too hard to solve.

The new series will see Bob the Builder continuing its long tradition of telling fun and interesting stories through positivity and teamwork with exciting characters, relatable locations and an aspirational hero.

All of the show’s core characters return for the new series, including Bob’s business partner Wendy and popular vehicles Scoop, Muck and Lofty. Other fans’ favourites, Roley and

There’s still no job too big or small for Bob and the gang, as they approach every job with positivity, enthusiasm and their catch phrase “Can we build it? Yes we can!”

Bob also has a new home in the bustling metropolis of Spring City – a glimmering and rapidly-developing modern urban skyline of steel and glass, complete with its own docks, a diverse population and strips of shops and restaurants. But his switch to the big city doesn’t signal the end for his traditional home in Fixham, where he’s still going to be building and carrying out smaller scale jobs throughout the series.

As well as a new look; the voice cast has also been renewed in the latest development in the show’s history with Lee Ingleby (Harry Potter) taking on the voice of Bob, Joanne Froggatt (Downtown Abbey) the voice of Wendy, Blake Harrison (Inbetweeners) the voice of Scoop and Jacob Scipio (CBeebies) the voice of new character Leo.

Bob the Builder has been broadcast in over 175 countries and translated into 40 languages, exciting and engaging millions of youngsters across the world. However, the new-look Bob is set to reach even further with 40-plus mini adventures coming to YouTube for fans to enjoy

Christopher Keenan, VP Global Content & Executive Producer at HIT Entertainment Limited (“HIT Entertainment”) said: “Bob is the most popular builder in TV history and we’re excited to be taking him to the next level. While the new series retains the emotional warmth that has always given Bob the Builder a firm place in the hearts of young viewers, it’s now packed with more humour than ever before.

“The sky really is the limit for Bob, Scoop and the other members of the team and we’re looking forward to seeing where their adventures take us in the future.”

With a range of consumer products due to hit stores in late 2016, pre-schoolers will be able to fully immerse themselves in Bob’s world even when they aren’t enjoying the teams’ on screen antics.

Don’t miss the exciting new CGI-animated series of Bob the Builder when it airs on Channel 5’s Milkshake from 1st September 2015 at 7.20am.