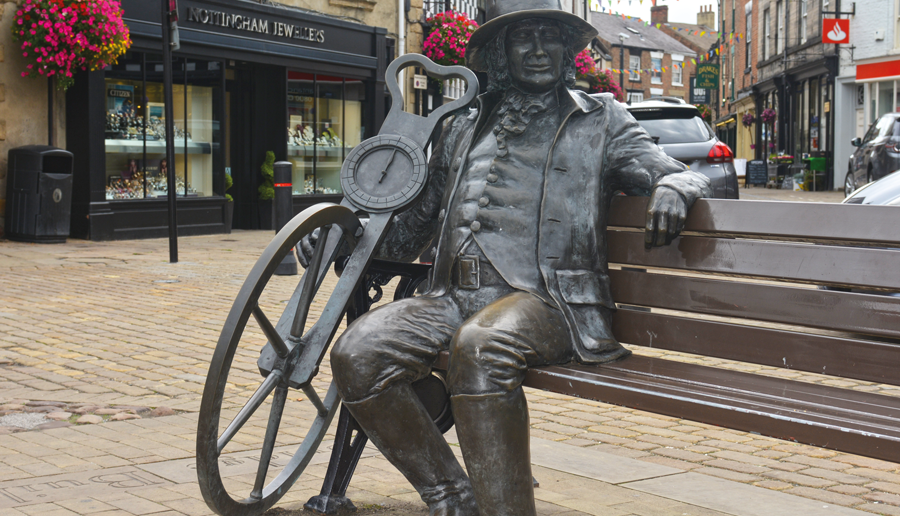 By yorkshire reporter on 03/09/2018 0 Comments
■ STATUE IS IN THE MARKET SQUARE, KNARESBOROUGH. Image © Yorkshire Reporter

John Metcalf of Knaresborough became blind due to smallpox at the age of six but this didn’t stop him from excelling in sport, playing the violin, being a guide and stage-coach conductor. However, it was his skill as a road-maker that he was best known.

Metcalf was born in a cottage in 1717 near to Knaresborough Castle. His father kept a couple of horses and after Jack’s illness he learned to ride. His was much the typical boyhood, joining in the games, climbing trees and mischeiviously taking apples from orchards.

Jack’s parents, with a view to him earning a living, had him taught at the age of thirteen to play the violin. He also became a keen sportsman, he fished, hunted boxed, and wrestled and amazingly became skilled at guiding travellers over the bad tracks and muddy roads of the Forest of Knaresborough.

He became popular as a fiddle player in some hotels and it was at the Royal Oak in Harrogate, later becoming the Granby Hotel, where he fell in love with Dolly Benson, a daughter of the landlord. Apparently, Jack was what might be described as ‘a bit of a lad’ by the age of twenty-one, and by all accounts he ‘put  himself about a bit’ becoming involved with another woman who became pregnant. Soon, Jack found it prudent to make a hasty exit from the scene due to there being danger of a forced marriage. He found himself wandering the east coast of Yorkshire and further north to Newcastle, earning a living playing the fiddle.

Several months later, he returned to Harrogate for a short time and then he was off again, this time sailing a boat from Whitby down to London. He stayed there for a few months then returned home, this time on foot.

By the time Jack had returned home, Dolly Benson had become engaged to a shoe-maker, but after Jack’s return, their relationship was rekindled and they arranged to elope just before Dolly was due to tie the knot with the shoe-maker. Naturally, Dolly’s parents were angry, but the marriage proved a success and the couple had four daughters.

To earn a living now, Jack tried his hand at several occupations with little success. Soon though he found himself involved in the Jacobite Rebellion of 1745 becoming an assistant to a sergeant in the army of General Wade. Jack would play his fiddle on the battlefields of Falkirk and Culloden before he marched home.

In 1754 he set up as a carrier and plied the first stage-wagon between York and Knaresborough. It was while he occupied himself at this which impressed upon him the appalling state of the roads. Just before this, an Act of Parliament was passed for toll roads known as ‘turnpike’ roads in the Harrogate area. It’s usually accepted that the road from Harrogate to Knaresborough was the first one which Jack had worked on but only partly due to turnpikes not being new roads, but old improved ones.

After working on several roads and early in 1759, his most difficult task was the road from Wakefield to Huddersfield and by Crosland Moor to Marsden and over Standedge to Austerlands towards Manchester for which he was paid £4,500 for the twenty- one miles of road, nine miles of which he employed four hundred men, sixty working on half a mile over deep bog. This was where he used his method of laying foundations with bundles of heather known as ‘ling’. This undertaking needed no repairs for some twelve years.

During the years 1777 and 1778, he was constructing the eight miles of road between Huddersfield and Halifax by Grimscar, one section of the new turnpike from Halifax to Sheffield and about two years later he built Ottiwells Bridge, as well as a short length of road near Marsden. During all these works, he managed to take his wife to Stockton on Tees for medical treatment leaving her there with one of their daughters. Sadly, Jack’s wife died in 1778. By now, Jack had entered his sixties and retired in 1791 retiring to his native  Yorkshire and went to live with a daughter and her husband near to Spofforth where he died age ninety-two in April 1810 and laid to rest in Spofforth churchyard.