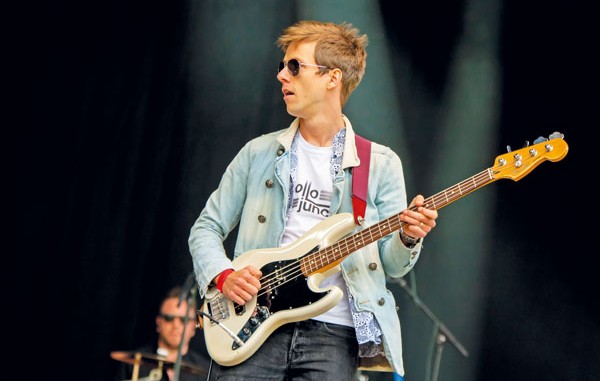 So the festival season has ended. In many ways the best was kept until last. Bingley Music Festival, now in its eighth year, has established itself into the festival calendar as the perfect way to end the season. Blessed with gorgeous late summer weather it delivered a festival full of splendour, conviviality and top notch music. This year saw another eclectic line up of bands new and old, along with openings for local Yorkshire talent too. Now, such a mixture does not always work, however, Bingley somehow did and it once again produced numerous highlights, and few, if any, low points over the two stages.

Apollo Junction from Leeds opened the festival on the Friday evening. The band are beginning to make deserved waves in the music world and it was easy to see why on this main stage performance. It was full of energy that set a standard for the rest of the weekend.

Although Cast and The Beat endeavoured to take up the baton maybe only Friday headliner James managed to continue with the same energy and panache! Moreover, some of Friday’s best music was performed on the Discovery Stage, Bingley’s exciting stage for new performers. Rae Morris delivered a set of pure beauty. There’s quite a buzz around Brighton-based Fickle Friends who also played the stage and no wonder. They are playing shows wherever they can, and three songs that have each garnered over 100,000 plays on Soundcloud.

Saturday saw a huge crowd bathing in sunshine and preparing themselves for headline act Labrinth. However, the day was stolen from under his nose by Ella Eyre who completely threw the capacity crowd into a frenzy as she dominated every inch of the stage.

Ella performing with panache and passion to the point where anybody following her would have struggled to keep the same excitement afloat. However, she had been helped by Funeral For A Friend who gave their best festival performance of the year by including several iconic songs from their Casually Dressed and Deep In Conversation album. It would prove to be their last festival performance though announced at the end of the set. The band going their separate ways after fifteen years. They performed at their most raw and raucous. Totally splendid alternative rock. By comparison it was quieter on the second stage in musical terms but the quality of sets by the superb Meadowlark their melancholic alt-pop sounds have been receiving much support from BBC Introducing, counting people like Radio One’s Huw Stephens amongst their ever growing fanbase. Having recently made the Radio One BBC Introducing playlist, the duo – consisting of singer/guitarist, Kate McGill and producer/guitarist, Daniel Broadley – received plays on every Radio One Show. A wonderful blur of emotive song craft and subtle execution. Similarly the rather splendid Natasha North. 2014 was a bench-mark year for Natasha North. Not only did she tour with the likes of Suzanne Vega but was also invited to open the prestigious 2014 Liberty Human Rights Awards playing alongside the likes of Billy Bragg. Quietly building her career without taking the ‘all or bust’ route Natasha is one of the few artists that have ever made it from the Bingley Music Live second stage to main stage. Folk gem Natasha is a little bit special. We highly recommend you check her out.

Sunday saw something very special: Peter Hook is a senior statesman of the British music scene as one of the founding members of both Joy Division and New Order. Peter Hook and the Light formed in 2010 and members include his son Jack Bates, on bass. The band’s Bingley Music Live performance featured the very best of Joy Division and New Order’s albums. Indeed, watching were people who were only a twinkle in their parent’s eyes when New Monday came out connecting immediately to it was one of the joys of the festival. It was a moment that someone will never forget. Add to the unforgettable moments a stunner of a set from new band Vant. They are being lauded as the new Arctic Monkey’s but in truth they are better than that! And make a note of Runaway GO, Belfast based Indie Pop band. Fronted by joint vocalists Dave Jackson and Fiona O’Kane, who produced a mesmerising performance. They genuinely are one of the most exciting and original bands to surface in some time.