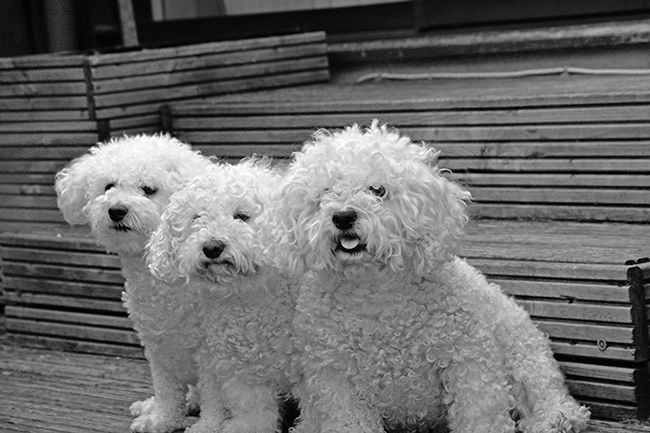 COAT: The Bichon has a double coat, soft and dense underneath, more coarse on the outer, which combine to give a substantial soft texture. The coat is white and stands away from the body, producing a powder-puff appearance. Grooming is not for the faint hearted and requires constant attention. Many owners choose a shorter clip as this breed’s coat is high maintenance.

TEMPERAMENT: This attractive “companion” small dog is highly intelligent, playful, and comical. Although brave and independent in many ways, this breed HATES being alone and can certainly suffer from separation anxiety. They NEED to be with their family and make wonderful household pets, but even so, never leave young children or gregarious teens alone with your pet dog, what-ever the breed. Treat the Bichon well and you will have a wonderful little dog and can enjoy each-other massively. Bichons should be socialised from 8 weeks old. Obedience puppy training is very advantageous to owner and puppy. They are quick witted and are happy to learn tricks.This breed needs their confidence building and should be treated with velvet gloves as they will become nervous and fearful. They like to be independent little dogs. known to be difficult to house-train. However, overly strict training will break this loving little dogs heart! Bichons do have lots of energy and need regular exercise, walks and games.

HEALTH: All dogs can develop genetic health problems and a reputable breeder should give you an honest account of the health of their breed line. Good breeders have to uphold a reputation of healthy blood lines. Bichon Frise are prone to allergies, such as chemicals, pollen etc and can scratch and chew themselves into a very unpleasant condition.

HISTORY: Once again, the exact origin of breeds with ancient backgrounds, such as the Bichon Frise, can not be absolutely verified. Earliest records suggest at least 2000 yrs ago. However, the Bichon is believed to be descended from the ‘Barbet’ , a medium sized woolly water dog as are the ‘Bolognese’ , the ‘Coton de Tulear’ , the ‘Havanese’, and the ‘Maltese’ , all Mediterranean!  There are many theories, France, Italy etc, etc. They were prized possessions of the very wealthy but lost popularity when organ grinders and circus acts discovered their swift learning ability to perform for the public. However the Bichon remains very popular in France.

There are 3 Bichon’s in our family, Suzi 6yrs old, Lulu 51/2yrs and Boe 5yrs who belongs to my daughter.

All three get on really well together and enjoy the company of the rest of the family dogs Jasmine (Golden Doodle) Lilly (Shitzu) Poppy (Teacup Yorkie) and Nippy (Jack Russell) quite a gang who frequently spend a lot of time together usually on walks and at my house.

I did lots of research on the many different breeds of dogs before deciding to have a Bichon, but the white fluffy dogs with the appealing dark eyes and nose looked stunning and the temperament was just what I wanted so with my mind made up we got Suzi, that led to getting Lulu for company and then my daughter was so taken with the breed that she decided to get Boe.

At first my partner wasn’t keen on the appearance of the breed when I showed him the photos on the net, many are puffed and fluffed up with the traditional look that the show Bichons have. I knew from my research you could just have the puppy cut as it is known which is trimmed all over without the definition of the traditional and show look. This is the style we prefer and have maintained, it comes down to personal choice.

All three Bichons are different Suzi short legged and stocky, Lulu petite, and Boe somewhere in the middle with finer bones and hair. Each like us humans have different personalities.

Suzi had quite a character from the day we brought her home. An explorer, very mischievous, defiant and certainly a greedy pig. For quite some weeks the word NO was the most used word in our house. Same with the visiting dogs she just wouldn’t leave them alone when they were tired, she didn’t get their message “enough now”. Once she realised who was the boss we couldn’t have a more obedient dog but she still rules the gang but respects them.She loves retrieving balls and would swim all day long in lakes and loves surfing the waves at the seaside.

Lulu was totally different from Suzi, she never touched anything she wasn’t supposed to from the moment we brought her home and is a slower more fussy eater. She just wanted carrying around and to this day I am sure Lulu would be happy if I had a pouch like a kangaroo and put her in it. Lulu doesn’t like a lot of noise and when visitors come humans or dogs after the initial meet and greet you will quite often find her in bed in another room. You wouldn’t ever see Lulu paddle let alone swim so opposite to Suzi. She however is the one that gets really excited when we go out to meet other dogs and loves playing on freshly cut lawns chasing and been chased. She loves all animals and enjoys watching wildlife programmes on TV.

Boe again was very good from day one, just wants to please, always pleasant, likes to sit in her favourite seat, enjoys running around when she’s out and very happy to fit in with whatever you are doing. Boe doesn’t like been left home alone and even if you pop out for just 10 mins when you arrive back it as though you have left her for days, she jumps and screeches around so relieved you’re back. Again Boe doesn’t enjoy playing in water either.

The things all three have in common are:

● love our company and each other’s

● Have separate food dishes but never pinch each others food or argue.

● Walk well on the lead and easy to recall off the lead.

● Never bark unless to alert you.

● Sprawl out on their backs snoozing.

All three were house trained within 2-3 weeks. This was achieved with a lot of time teaching them by following the normal guidelines,taking them out after food, drink, sleep or play and a lot of praise

All three are brushed and trimmed regular which is necessary with this breed,but given the lifestyle my dogs have in that they go on walks exploring woods and running through country fields not just round the block on pavements it is hard work especially when I return with black dogs instead of white.The hard work is worth it ,I am glad I picked this breed and anyone considering this breed I would certainly recommend these little dogs.