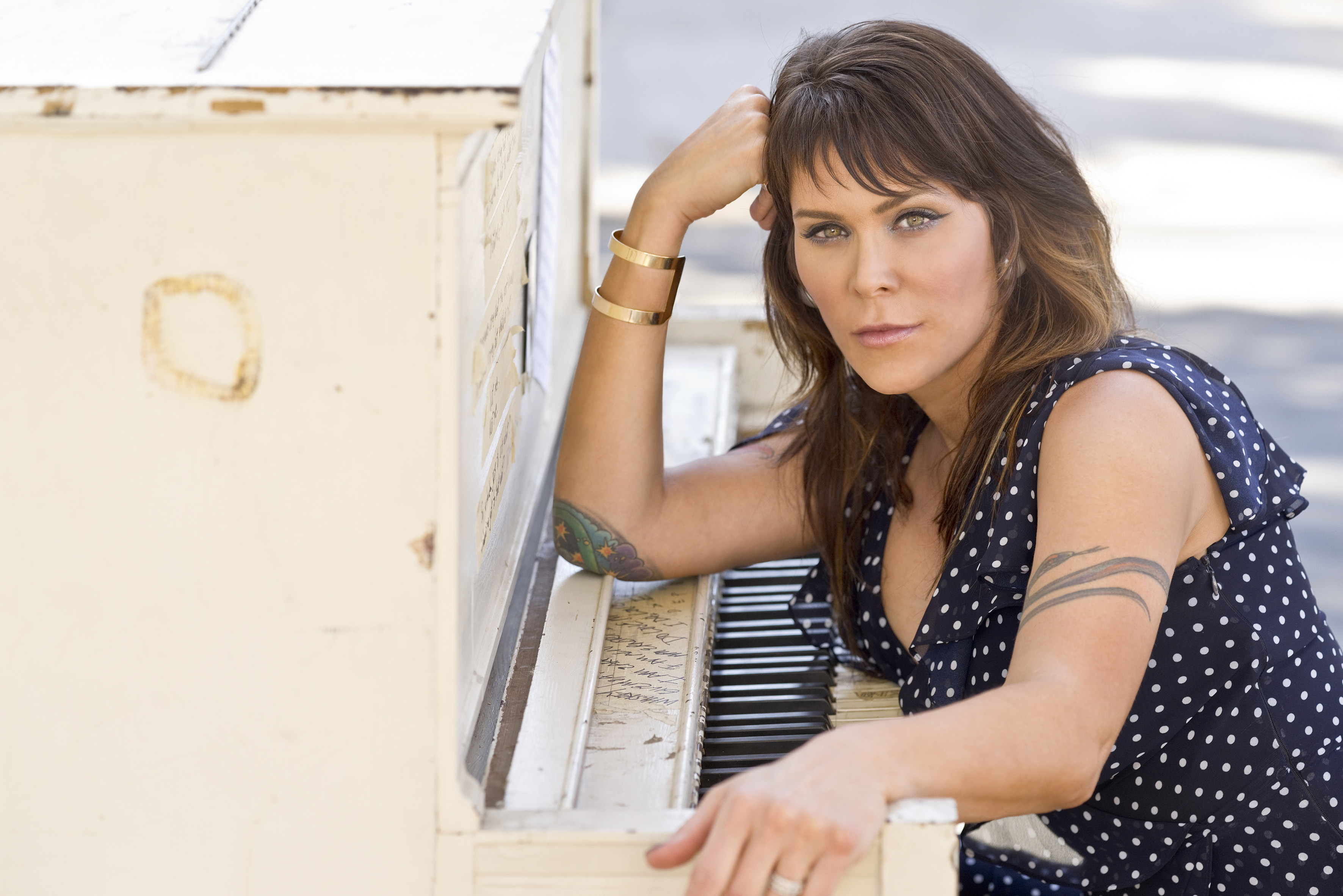 It’s that voice. When Beth Hart sings, clocks stop, hearts dance and neck-hair tingles. And when she tells her rollercoaster story, in a West Coast drawl that could distil whisky at fifty paces, it’s every bit as compelling. “There was definitely difficult stuff,” she reflects, “but there was incredible stuff as well. I wouldn’t change any of it, because you bring your experiences to the music.”

Picture the scene. It’s midnight in the mid-’70s, and in a slumbering Los Angeles family home, four-year-old Beth Hart is about to cause her first musical disturbance. “There was this commercial for pianos on TV,” she recalls, “and the music was Beethoven’s Moonlight Sonata, which was the most beautiful thing I’d ever heard. So in the middle of the night, I got up and played part of that song on the piano. My mother, father and all the other kids came out and they gave me so much love and attention, I knew right away this little ham had to have it. So I always knew I wanted to do it. I just knew…”

Her passion never wavered, but the road to Hart’s stunning last album, ‘Bang Bang Boom Boom’, was far from a smooth ride, and you hear every bump in her unflinching lyrics and soulful delivery. “I never thought I’d be a singer,” she says. “I thought I’d be a classical pianist or cellist, go to Juilliard. When I did start singing, I took opera lessons and my teacher was wonderful, but one day she goes, ‘Beth, I don’t think classical is for you, because you like to do your own thing with the music’. That’s when I started putting singing to my own music.”

If Hart’s back catalogue is eclectic, her formative tastes were even more so, taking in jazz, rock, blues, gospel and grunge. “Billie Holiday and Ella Fitzgerald: I’m fascinated by them,” she says, “But then when I heard Robert Plant and Chris Cornell, I couldn’t get over their power. But then, Rickie Lee Jones and James Taylor, their voices were so lovely and soft…”

Beth paid her dues with an acoustic guitar around LA. Her big break came in 1993, when a $50 bet with a friend led her onto a TV talent show.“ And I won,” she grins. “I won a lot of money, over $100,000. Instead of being happy the night I won, I went into total depression, I was so afraid of the pressure. But boy, I took that money. I lived in a basement, and my piano was full of roaches, so I got new furniture, moved into a great apartment. I was on cloud nine. I did a lot of drugs. I spent that money in less than six months.”

Signed to Atlantic Records, Beth worked with top producers on 1996’s Immortal, and scored international hits with cuts like Am I The One, but today, she contends it was on 1999’s Screamin’ For My Supper – home to the smash-hit LA Song (Out Of This Town) – that she found her voice. “If I could have my way,” she says, “I’d love it if people bought my new album and Screamin’ For My Supper simultaneously, because I think that record is where I became a real writer.”

But again, pressure clipped her wings. A heady cocktail of drugs and Beth’s unmedicated bipolar disorder ensured that her Atlantic deal went sour, and it took the intervention of road manager Scott Guetzkow to pull her back from the brink. “I went into five different hospitals that year, not including rehabs,” she says. “It was so bad that I remember talking to my psychologist and he said, ‘I don’t think you can handle being in this business…’”

Around the turn of the millennium, Beth ditched her “drug of choice” (Klonopin), drove to Vegas, married Guetzkow and never looked back. Though her feet stayed on the ground, the musical highs returned. In 2003, she shot back with third album, Leave The Light On (Billboard: “One of the year’s most affecting albums), while in 2005, her popularity on the continent was thrillingly bottled by the Live At Paradiso release from Amsterdam. In 2007, 37 Days gave Beth the European hit ‘Good As It Gets’, and in 2010, ‘My California’ found her singing with new sensitivity about deeply personal themes, in particular the loss of her beloved sister, Sharon, on ‘Sister Heroine’.

While the buzz grew, that voice had caught some famous ears, and to date, Beth counts some of rock’s most iconic guitarists amongst her collaborators. Her earliest A-list hook-up was alongside British veteran Jeff Beck (“I didn’t know a guitar could sound that way”), while she enjoyed fizzing chemistry with ex-Guns N’ Roses legend Slash, who guested on ‘Sister Heroine’ and co-wrote Mother Maria for the Download To Donate For Haiti charity album. “As you can imagine,” Beth admits, “I was quite nervous. His personality is the absolute opposite to mine. I’m pretty high-strung when I’m working, and he’s very mellow.”

It was a chance meeting with the blues star Joe Bonamassa in a hotel lobby that changed her trajectory, resulting in an invitation to sing on the Kevin Shirley-produced soul-rock covers album that became 2011’s ‘Don’t Explain’. “I said, ‘are you kidding me?” she laughs of her response. “We made a big list of covers over the phone, but we only recorded for four days. We instantly clicked.”

With cuts like ‘I’ll Take Care Of You’ hijacking BBC Radio 2’s playlists in the UK, and Classic Rock including the release in its Top Albums of 2011, Don’t Explain proved to be Hart’s tipping-point and the perfect springboard for ‘Bang Bang Boom Boom’. With 11 original songs recorded live by Kevin Shirley, this new collection gives Beth’s eclectic influences free rein, spinning from Spirit Of God’s brassy gospel to the sparse ‘Thru The Window Of My Mind’, with her first-ever piano solo on ‘Swing My Thing Back Around’, and an impossibly tender vocal on the Billie Holiday-flavoured ‘Baddest Blues’.

More than that, though, it’s the album where Beth is finally able to admit she might actually be happy. “Often on old records, I wrote about pain and fear,” she says. “I didn’t write so much about love. I always felt like I didn’t understand it or wasn’t worthy. This is the first album where I have, and it’s such a beautiful feeling. I feel like I’ve gotten to fit into a new pair of shoes, y’know, and I can walk a different walk. Every album is special to me. But with this one, there’s a real specialness about it, because I’m at a different age and in a new headspace.”

For Hart and Bonamassa, making music together grew out of the friendship and mutual artistic appreciation they developed after crossing paths on the road numerous times, particularly on the festival circuit in Europe. Bonamassa wanted to do a project with her, and came up with the idea for a soul covers record. Shirley, who’s produced 12 of Bonamassa’s albums, was enthusiastic, and Bonamassa contacted Hart. “When I got the call that he wanted to do a soul record with me, I figured I’d be the background singer. He said ‘no, you’re singing lead.’” The chemistry clicked, and

‘Don’t Explain’ was released in 2011, followed now by 2013’s ‘Seesaw’ and a mini joint European tour —in between, both Hart and Bonamassa have toured, recorded solo albums, and reached new career highs.

For the album ‘Seesaw’, Beth Hart and Joe Bonamassa received a Grammy nomination in the category: Best Blues Album. “This is a really happy day for me and I’m really proud and have so many people to be thankful for, but I am most thankful for my husband Scott, for without him there’s no way I’d be able to still be here enjoying the love of music and life.”