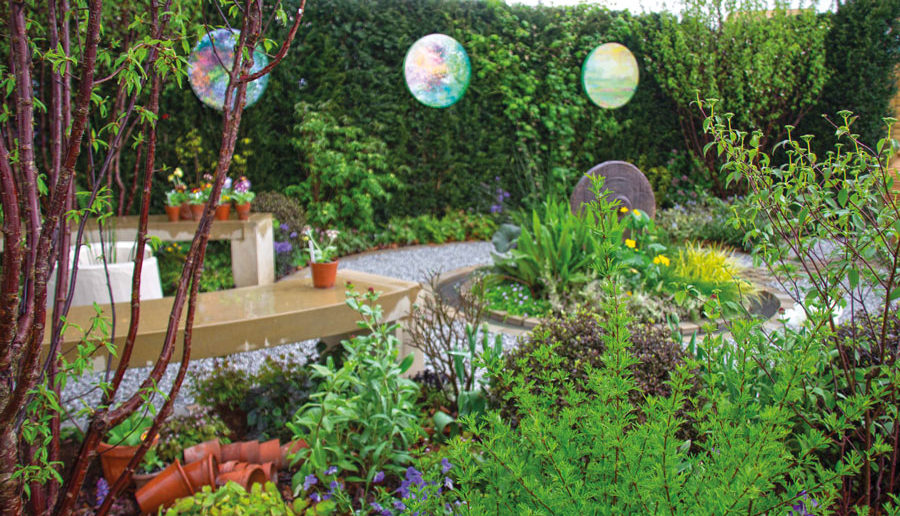 BEST IN SHOW FOR PERENNIAL AT HARROGATE SPRING FLOWER SHOW

The Perennial Legacy Garden won Best in Show and a Premier Gold Award at the Harrogate Spring Flower Show. The garden, designed by David Wyndham Lewis, raises awareness of the charity that helps people in horticulture and highlights the impact that leaving a gift in your will has on its work.

The charity, which marks its 180th anniversary this year, receives about a third of its annual voluntary income from legacies. The Perennial Legacy Garden provides an opportunity to reach more people in Yorkshire with information about how Perennial supports individuals and families with a wide range of issues relating to physical and mental health, social and welfare support and money matters.

The garden is a representation of life’s journey with a flowing water feature depicting the course of life, eventually reaching a still pool, which is a place to reflect. A pathway cuts between woodland areas, showing how Perennial brings light to the darkest of situations. Plants include a collection of rare potted plants, Tibetan cherry trees (Prunus serrula), native bluebells and a wetland and marginal area featuring primulas. The garden was universally praised by judges as a beautiful, carefully planted space that really gets across the message of legacy giving.

“We are thrilled to have won a Premier Gold Award and Best in Show for the Perennial Legacy Garden – well done to David and the team who have worked so hard to make the garden look wonderful.”

David Wyndham Lewis, who is both a garden designer at Blank Canvas Gardens and Major Gifts Manager at Perennial, comments:

“Perennial’s work is often described quite simply as a lifeline to those it helps, so I wanted to convey through the design of the garden the journey of life and the idea of legacy. It feels fantastic to have received such positive comments from the judges and we hope that visitors were also inspired with plenty of ideas from the garden to take home.”

The garden has been created using local craftspeople and growers wherever possible and brings together support of businesses from across the industry. It was built by contractor David Massey, based in Knaresborough near Harrogate. Plants were supplied by a range of nurseries in the Harrogate area and CED Stone provided the hard landscaping.  Pots & Pithoi supplied the water feature and a tryptic of artworks by Jane Procter, representing the three phases of life, hangs on the yew hedging. The most unusual item is a moss-covered urn loaned by Chilstone, which is part of its personal collection and usually lives in woodland next to the Chilstone headquarters.

The Perennial Legacy Garden aims to increase awareness of the charity in the North of England, helping spread the message that Perennial’s friendly and knowledgeable team has the experience and resources to make a difference to people’s lives, regardless of the scale of their issue or concern. Perennial helps and supports anyone who creates or maintains gardens, parks, sports facilities and other green spaces covering a wide range of professions within the broader horticulture industry.

Perennial is also known in Yorkshire as the organisation that owns and manages York Gate Garden in Adel, an Arts & Crafts inspired garden that is regarded as one of the UK’s best small gardens.

Gardeners from York Gate helped with the planting of the show garden and after Harrogate Flower Show, plants from it are sold off in a special plant fair at York Gate Garden.