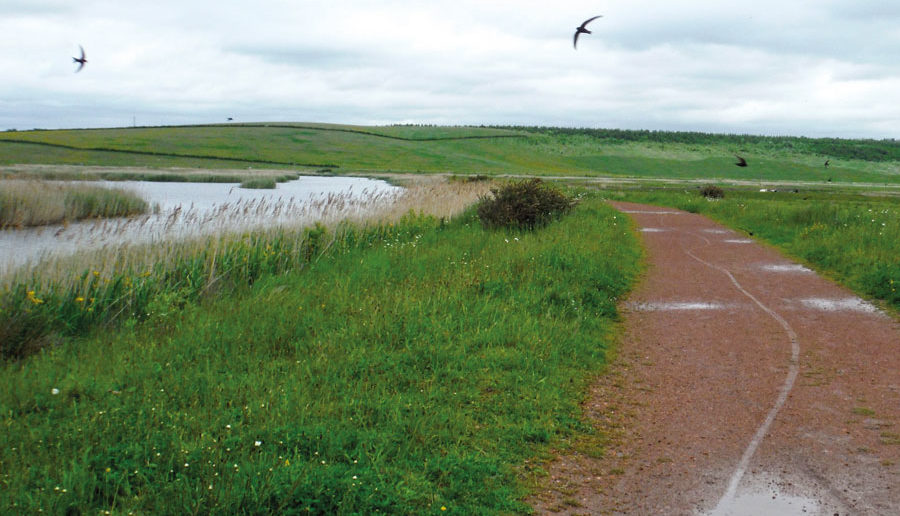 Become A Champion For Swifts

One of my favourite times of year in the birding calendar is upon us, the arrival of the common swift. Swifts start to arrive in the UK during mid-April and, as the temperature is generally cool at that time, our first views are often of low flying birds hawking for insects over water.

The swift triggers such a response of longing and ‘retrouvailles’ (the perfect word in French that means the happiness of meeting again after a long time) mainly because it spends so few weeks with us in the UK. Breeding birds return to their nest sites in the first week of May in Yorkshire, but the colony is usually deserted again by the first week in August. After this, only a few migrating birds are seen as they ‘graze’ their way southwards back to Africa.

The intensity of our feelings towards swifts has increased in recent times as, year by year, fewer swift screaming parties are heard in our towns and cities. We’re all responsible for this but I can reassure you that it is mostly out of ignorance rather than by intent.

The majority of swifts that come to breed in the UK use man-made structures such as houses and old industrial buildings. Unlike swallows and house martins, they don’t build a visible nest but, instead, swoop under the eaves, disappear under roof tiles or into cracks and crevices. Their approach to the nest is so fast (more than 40 miles per hour, the fastest bird in level flight) that, unless you know they’re nesting there, you can easily miss them flying in and out.

Consequently, swift populations have been devastated on a grand scale by home improvements, restoration projects and council regeneration schemes. Often there has been no knowledge that swifts have been breeding on site for generations. Building surveys are usually done outside the short breeding season. Once the work is done, new plastic soffits and boards, reroofing and re-guttering all prevent the returning swifts from entering their holes. The colony is lost. Many birds kill themselves trying to get into their nest. Those that survive are unlikely to breed due to the lack of suitable sites and lack of time to find them. Virtually all of the thousands of new homes being built have no access for swifts. So, what can we do and how can you become a swift champion?

There is a nationwide network of advisory groups led by the Swift Conservation Society www.swift-conservation.org and Action for Swifts http://actionforswifts.blogspot.co.uk/. I am involved with Leeds Swifts. Our aim is to stop the decline of swifts in the UK and we need your help.  If you have swifts, we need to know about them and get them recorded. If you need to work on your house and have swifts we can give you lots of advice about how you can preserve your colony. If you don’t have swifts but would love to start a new colony then the amazing thing is that swifts can be attracted to nest in boxes. They don’t form new colonies very easily but if you put up boxes and quietly play swift love songs, you could attract newly maturing birds to nest. Find out more on Facebook/LeedsSwifts and watch video footage of a swift colony started in 2012 in Gledhow, Leeds.