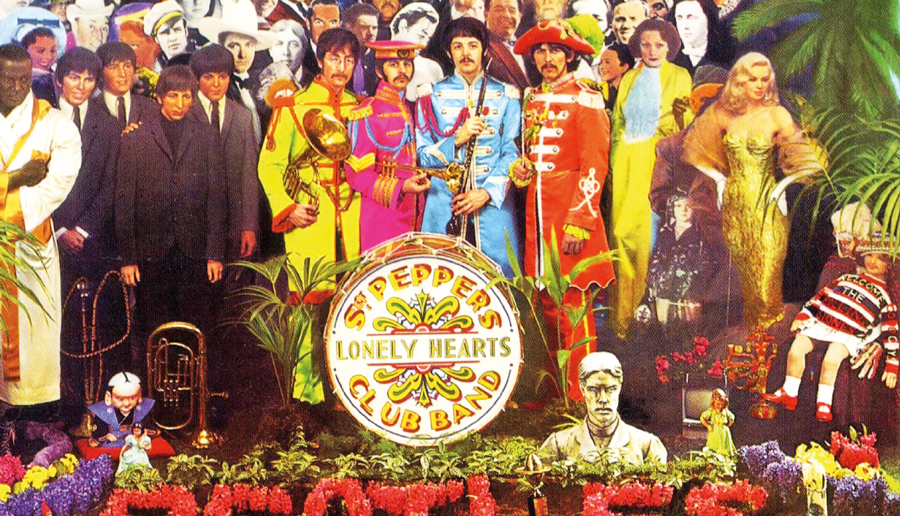 THE BEATLES, SERGEANT PEPPER AND THE LEEDS CONNECTION

“It was twenty years ago today, that

To bring things up to date, it’s now fifty years ago this month, June 1967, that The Beatles released their most famous album or ‘LP’ as they were called way back then, ‘Sergeant Pepper’s Lonely Hearts Club Band.’ One of the songs on the album, ‘Being For The Benefit Of Mr Kite,” tells the story of a group of performers in ‘Pablo Fanque’s Circus’. These names were not a product of John Lennon’s imagination, but real people appearing in a circus during the Victorian era. The inspiration for the song came about after Lennon had bought a poster from an antique shop in Kent advertising ‘Pablo Fanque’s Circus Royal’ due to appear in Rochdale in February 1843.

“For the benefit of Mr Kite

There will be a show tonight on trampoline

The Henderson’s will all be there

Late of Pablo Fanque’s Fair- what a scene….”

William Kite, a celebrated acrobat was the son of a circus owner and is thought to have worked in Fanque’s circus from 1843 to 1845. Whether John Lennon knew of the very real tragedy that would befall the circus when it appeared in Leeds sometime later isn’t known.

‘Pablo Fanque’ was the pseudonym of William Darby born in Norwich in 1810 a  child who was to become the first black person to become a proprietor of a circus. His father John might have been a slave imported into the country and later employed as a butler. William was orphaned quite young and became an apprentice in a travelling circus and soon became a skilled horseman as well as being talented in other circus skills. Changing his name to Pablo Fanque because it sounded much more ‘exotic,’ as he paved his way to becoming a circus owner. Far from hiding his light under a bushel, he advertised his circus as “The Greatest Combination of Talent in the World!”.

Fun and laughter was about to be dashed as tragedy approached for Pablo Fanque personally. On March 18th 1848 at King Charles Croft in Leeds, the circus opened for the benefit night of Mr Wallett the clown. The circus was crowded and some people had to be turned away owing to want of space, which in many ways was lucky for them as disaster was about to happen.

At about 9:45 pm Pablo Fanque junior was performing on the tightrope when suddenly part of the arena called the pit, a wooden structure, fell to the ground with a tremendous crash. Some six hundred people including children, fell with the shattered timber into the lobby where Mary Wallett and Pablo Fanque’s wife Susannah were.

Mary Wallet received bruising, but Susannah was killed by two planks that had struck her at the back of her head and back. There were many injuries, also the gas which illuminated the arena was extinguished after the pipes had broken.

The inquest was opened at the King Charles Hotel the following Monday and after several witnesses gave evidence, the Coroner eventually summed up and the jury returned a verdict of accidental death.

Susannah Darby’s funeral took place at St George’s Field, Clarendon Road in Leeds, also known as Woodhouse cemetery. It was an elaborate one, the hearse, being drawn by four horses, with Susannah’s favourite horse being led at the rear by a groom. Then came the mourning coaches and after them the whole of Pablo’s stud horses bearing emblems of mourning and each one led by a groom. It is thought that about ten thousand people attended the funeral. After a short period of mourning, Pablo married Elizabether Corker in Sheffield. She was a circus rider and many years younger than Pablo.

In December 1870, Pablo Fanque’s last circus opened in Nottingham. His movements are a little sketchy after this time until his death at the Britannia Inn, Stockport on May 4th 1871. After his death, Toby Knight, a roundabout operator bought the circus from the Darby family.

Pablo was brought back to Leeds to be buried alongside his first wife Susannah. The grave is now in the grounds of the University of Leeds and can still be seen. It is a great tribute that his name lives on as part of the fantastic Beatles phenomenon that shook the world in the heady days of that fabulous decade, the 1960s.