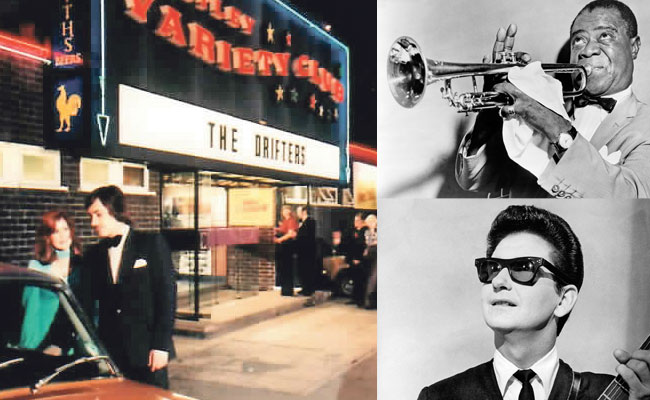 During the 1970’s I paid regular visits to the Wakefield Theatre Club and Batley Variety Club in West Yorkshire, where we could sup good beer, eat food such as scampi and chips and enjoy world class entertainment such as Roy Orbison, Gene Pitney, Louis Armstrong, Dusty Springfield and many others at reasonable prices.

We’d get home in the early hours of the morning, have a couple of hours sleep before heading for work. Those were the days!
I particularly remember visiting Wakefield in 1975 with my French girlfriend to hear Charles Aznavour sing his beautiful song ‘She’ which was the theme from the TV series ‘The Seven Faces of Woman’. When we went to Batley it was usually by the coach load which had been organised by our local pub or a ‘works’ do’.

Batley Variety Club was built on Bradford Road, a derelict site that was once used as Batley sewage works. The club was the brain child of James Corrigan whose parents were stalwarts of the fairground circuit in and around Yorkshire. The club opened in 1967 and the act on the opening night were the Dublin born ‘Bachelors’ who sang old favourites such as ‘Charmaine’, ‘Diane’, ‘I believe’, ‘Ramona’ and my favourite, ‘I wouldn’t trade you for the world’.

I saw the Scottish vocalist Lena Martell at Batley. She had a Number One hit record with Kris Kristofferson’s gospel song ’One day at a time’, a song she first heard on the radio when she was recovering from a heart attack in her hospital bed.

Batley Variety Club also produced romance for some of the stars who appeared there such as Roy Orbison and Maurice Gibb of the Bee Gees. After one show at Batley Roy Orbison visited Peter Stringfellow’s ‘Cinderella Rockafella’s club in Leeds, where he met Leeds born Barbara Wellnoener-Jacobs who later became his wife. Maurice Gibb fell in love with one of the club’s waitress’s, Yvonne Spenceley and they married in 1975.
Batley Variety Club closed in 1978. At its peak it had 30,000 members, but could no longer afford the escalating fees of the stars who had previously graced their stage. The club re-opened in 1981 as the New Frontier Club and was for a time quite successful but could now be demolished by developers who wish to change it into a retail park or office complex.

Maureen Prest of Birstall, who has written a book on the Batley Variety Club and its late founder, James Corrigan, called ‘King of Clubs’, opposes the demolition believing it has historical importance. She has launched a campaign to turn the former variety club into a listed building.