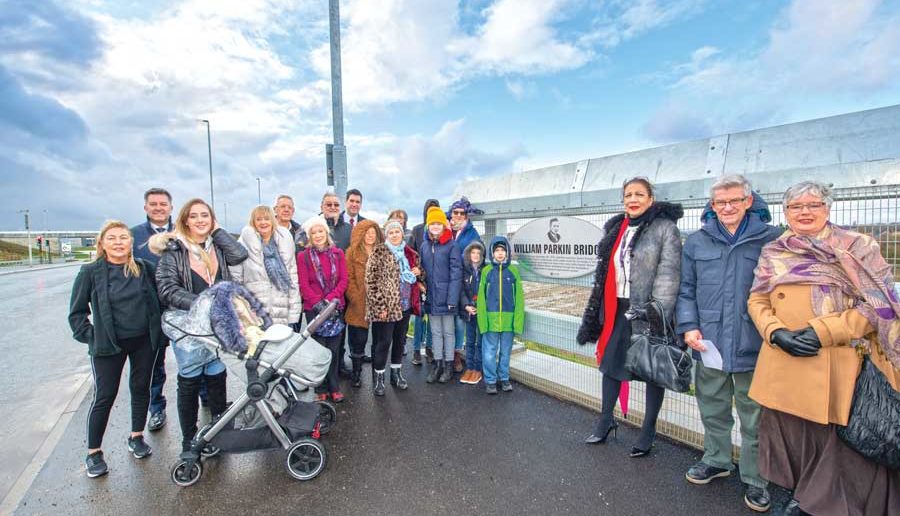 A street and now a bridge have had plaques placed in recognition of the heroic actions of William Parkin, who rescued 12 women on the night of a tragic explosion at the Barnbow Munitions Factory on December 5th 1916.

Barnbow Munitions Factory, Crossgates, was a purpose built site which covered 400 acres. When operations began in December 1915 the factory employed 17,000 people, 92% of which were female. It became the most productive British shell factory of the First World War, a full media blackout for security reasons was in place but many described it as being like a town.  There were many buildings where varied stages of the production of the shells was carried out, the site included changing rooms and railway lines for trains to bring materials in and out.

Employees worked shifts to keep production going and a platform was built at a nearby rail station to bring the many workers in by train.

There was a canteen for workers and although food was rationed they were allowed to drink as much barley water as they wanted.  Milk was also readily available from the factory’s dairy farm as it was thought it helped ease the yellowing of their skin which was a side effect from the cordite – a propellant for the shells. The women became known as the canaries because of this.

On the night of December 5th 1916 workers arrived to start the 10pm shift. In room 42 where 150-170 women worked, shells already loaded in another room were there for the women to insert the fuse, and screw down the cap. The cap was tightened further by a machine which revolved the shell but at 10.27pm that night an enormous explosion occurred killing 35 and injuring many. It was the largest single loss of life in Leeds’s history.

It was a dreadful scene, identification being only possible by identity discs that had been worn by the victims. There was carnage everywhere, the machine where the explosion happened was destroyed completely and steam pipes had burst.

Men and women rushed to the heart-breaking scene to rescue those that were still alive. William Parkin, one of the mechanics working nearby, dashed into the wreckage.  He entered the room time after time until emergency services arrived bringing out 12 injured women. Later, the girls of the Northern Shell Stores at Barnbow presented him with an inscribed silver watch in appreciation of his enormous bravery. With the media blackout in place the tragedy was kept under wraps until six years after the war.

Today, instrumented by Councillor Pauleen Grahame and Bob and Jackie Lawrence of East Leeds Historical And Archaeological Society, there is a memorial for the women who lost their lives at the factory in Manston Park, and William Parkin’s heroic action is remembered on lecterns. Streets are also named after some of the victims on the recently developed housing estate off Manston Lane. Historic England recommended the site of the factory must be protected to recognise the role of women in conflict and it is protected as a scheduled monument by the Department of Culture, Media and Sport. This means all development in the area has to be carefully managed which included the planning of the Thorpe Park estate, where now a street is named William Parkin Way and the bridge that crosses over it has had a plaque placed at each side, honouring his bravery.

William Parkin was born in 1893 to parents Thomas and Mary-Jane who were living in Garforth, and he was baptised at St Mary’s. Members of his family today recall that he joined the army at the outbreak of war but was injured with a bullet wound to his leg and bayoneted. He returned to fight for his country at the Battle Of The Somme and was mustard gassed.  It was after this that he started work at the munitions factory.

William married Mary Atkinson in 1919 at Castleford Parish Church and the union brought them seven children. He used an inhaler all his life due to the mustard gas poisoning but he did not let it stop him from supporting his family – he had quite a few businesses during his life as an engineer, grocer selling from a horse and cart, a smallholding and a taxi business.

“As a family, we are extremely proud of him and we

greatly admire his heroic actions on the night of

received recognition in the form of William Parkin Way.”

“I intend to keep the memory of the Barnbow Lasses

and William Parkin alive, everyone should know about

those who lost their lives working to keep others safe.”

This is something I am most proud of being involved with
and delivering.”

William Parkin Way passes partially over the site of the shell-filling factory. The idea for a dedication to William Parkin came following discussions between Cllr Pauleen Grahame and Richard Burns from Scarborough Developers. The plaques on the bridge that crosses over William Parkin Way, were made by Kris Nenadick from Leeds City Council Parks and Countryside.

On a personal level, I myself am also proud that I was born at The Falls Cottages, Austhorpe, in 1950, sharing something in common with William Parkin. He was living in what was then known as Rose Cottage in 1911 according to the census of that year, the very same cottage I was born in. The cottages were four dwellings opposite what was known as Smeaton Farm, where another branch of the Parkin’s lived at some point. I feel privileged to be able to have had the opportunity to write about him.

William Parkin died in 1964 age 71, but he will be forever remembered for his bravery in the face of an unimaginable and dreadful tragedy.

Two more explosions occured at the factory, two women died on March 21st in 1917, and on March 31st 1918 three men were killed in a blast.