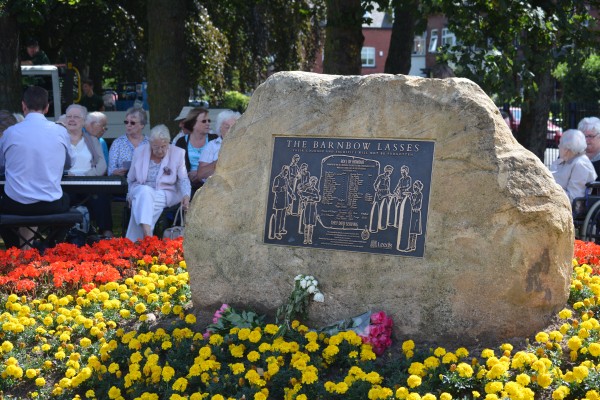 Last month commemoration ceremonies and events were held all over Europe to mark the centenary of WW1. One such local event was held on the 4th August to remember the fallen, in particular the 35 women known as ‘The Barnbow Lasses’ who lost their lives in an explosion at the Barnbow Shell Filling Factory near Crossgates, Leeds while contributing to the war effort.

The commemoration ceremony was held at the memorial to the Barnbow Lasses in Manston Park, Crossgates and was a real community affair. This is the 2nd ceremony organised by the East Leeds History and Archaeology Society (ELHAS) who lobbied the council for the memorial after researching the tragedy as they felt there was no recognition in the area. Bob and Jacki Lawrence of ELHAS first asked for a stone to be erected in 2004 and this was installed on a footpath crossing near the main roundabout in Crossgates in 2005. Due to the position, traffic pollution quickly eroded the stone so another was placed in Manston Park.

[private]This new memorial was erected in 2012 and community links have been developed since this time. Julia Windavis at Temple Newsam created a teachers pack to enable local children to be educated on the subject, and the Parks and Countrysides department suggested holding a competition each year for the flower display surrounding the memorial. Last year the competition was open to local schools and the winner was Grimes Dyke school. This year it was open to the Crossgates and District Good Neighbours, as ELHAS felt it would be good to have entries from the opposite end of the age spectrum.

Councillor Pauline Grahame has played an integral role in helping ELHAS to have the memorial installed in the park and was in attendance at the commemoration ceremony. She said “The memorial is highly important because it not only represents the Barnbow Lasses but everyone in the country who played their part in the war effort. Lots of different organisations have been involved in getting the stone dedicated and it is now on the local school curriculum so that the lasses will never be forgotten again. The new position of the memorial is ideal as many of the girls would have walked past here every day on their way to the factory. The ceremony today is fantastic for the local community and brings everyone together.”

The ceremony was also well attended by Crossgates and District Good Neighbours, including conductor John Whalley leading the singing group ‘sandwich and a song’ who serenaded the crowd with a number of upbeat WW1 songs. Also providing musical entertainment were the 1st Crossgates Brownies and Guides.

Bob Lawrence presented a cheque for £75 to Bill Hyde, one of the Patrons of Crossgates and District. He accepted the cheque for the group on behalf of the competition winner Harry Midgely who unfortunately was unable to attend.

His design evoked the famous WW1 image of poppies in a cornfield and was expertly planted out by the Parks and Countrysides department of Leeds City Council.

The event was rounded off with a buffet lunch in the Barnbow Public House which was kindly provided by Cllr Grahame.

Cllr Pauline Grahame & Mrs Jane Preece. Mrs Preece said “my husband and father in law worked for many years at the Royal Ordinance Factory, also known locally as ‘Barnbow’. My husband worked there for so long that he was nicknamed ‘Barnbow Jim’.” Both factories, each different, were built in close proximity.

l-r Hazel Watson, Betty Sharlott, Joyce Cope. Hazel said “it was a very touching and moving event” Betty said “I love the winning design representing poppies in the cornfield. It brought back memories and made me think that if my mother’s 1st husband who was sadly killed in 1917 had survived, I wouldn’t be here today as she later re-married and had me.”

l-r Mrs Hudson, Margaret Morley, Arlene Dickson, Jean Moore. They said “we really enjoyed the event today, it went really well. Everyone has got someone in their family that was in the war.”

Bev & Mally Hare. They live in the new housing development near Barnbow where all the streets are named after the Barnbow Lasses. They live on Ethel Jackson Road and had no idea who that was so researched and found out about the history. They then decided to attend the ceremony to remember the lasses.[/private]