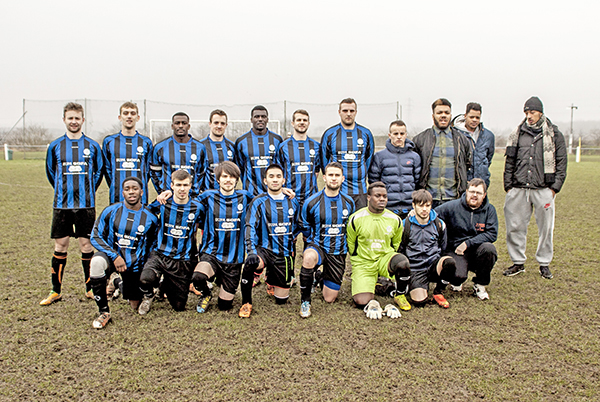 Badri Fc, based in Middleton Leeds, are scoring big in the Sunday League Championship despite only being a team for one year. They also play in the Bradford Flexi League, and are participating in several cup competitions. Currently second in the Sunday League Championship, and recently reaching the semi-final of a cup tournament, the 11-a-side team are proud of their achievements in such a short space of time.

The success is bitter sweet too. Josh Moon, with help from family members Kaine Moon and Jonathan Daniel started the team as a tribute to his best friend Ahmed Badri. The men had been close friends for over 10 years, having been to school together, when Ahmed tragically died. He was just 25 years old when he suffered a cardiac arrest whilst playing football. Ahmed was in Sudan at this time, studying there to be a doctor. All the friends he was playing football with were also studying to be doctors, and one performed CPR at the scene, sadly to no avail. It was later discovered that Ahmed had an underlying heart condition but he had had no awareness of this before he died.

Josh was understandably devastated by the loss of his friend, and a couple of months later decided to set up the team as a personal tribute to him as football was something Ahmed had loved. Josh says “It still upsets me to talk about it even though it’s been over a year. He was just the greatest, everyone who knew him admired him and was deeply upset and hurt when they heard of him passing. But we’ll never forget him and every game we play is dedicated to his memory.”

The team were all friends with Ahmed and playing football has brought everyone together. They feel Ahmed would be proud of where they are today. The team train on a Wednesday evening at Goals Soccer Centre in Kirkstall and there are around 20 men in the squad right now. Josh has big plans for the future though and is hoping he will be able to increase Badri FC to two teams next season, possibly playing in the Saturday League too. They are looking to take on more players next season to make this happen. The team have also spoken about doing something for charity in the future when they are more established but at the moment they are concentrating on progressing as they are. Badri FC couldn’t have been set up without the help of David Moon at Supa Sofa who has sponsored the team and provided for them financially, with Josh saying “We are all very grateful for what he has done.”

Understandably, the health of the team and indeed all grass roots football players is at the forefront of their minds and Josh says “if you have any doubts about your health at all then get it checked out.” He also thinks that every team would benefit from CPR/First Aid training and that it would be a fantastic idea to have somebody trained in CPR at every match. Unfortunately it did not save Ahmed Badri’s life but it can save many others.

With such emotion and determination going into every match, Badri FC are sure to continue scoring their goals – in every sense of the word!