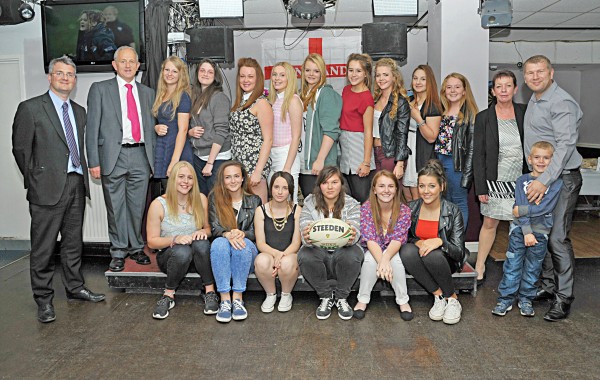 A new rugby club for girls in Kippax celebrated a great first season along with local Councillors.

The new club, based at the Kippax Welfare Sports and Social Club, currently have under-12 and under-14 teams. The girls have had a great season and Councillors Lewis, Wakefield and Harland were happy to have been able to fund their awards night which included a DJ, food and other entertainment.

The Kippax Kangaroos, who practice on Wednesday evenings, are looking for new players and coaches, and anyone interested should get in touch.

“The Kippax Kangaroos have gone from strength to strength over the past seven months and it’s great that we were able to fund their awards evening. Girl’s rugby is becoming increasingly popular and we encourage people to contact the club to get involved. We look forward to continuing to support the girls in the future.”

“On behalf of everyone at the Kippax Kangaroos I would like to thank our local Councillors for their donation towards our awards ceremony. It is great that so many girls in the area have taken an interest in girl’s rugby and they are really helping to raise the profile of the sport. We’re all looking forward to next season starting and hope many people will get involved with the club.”