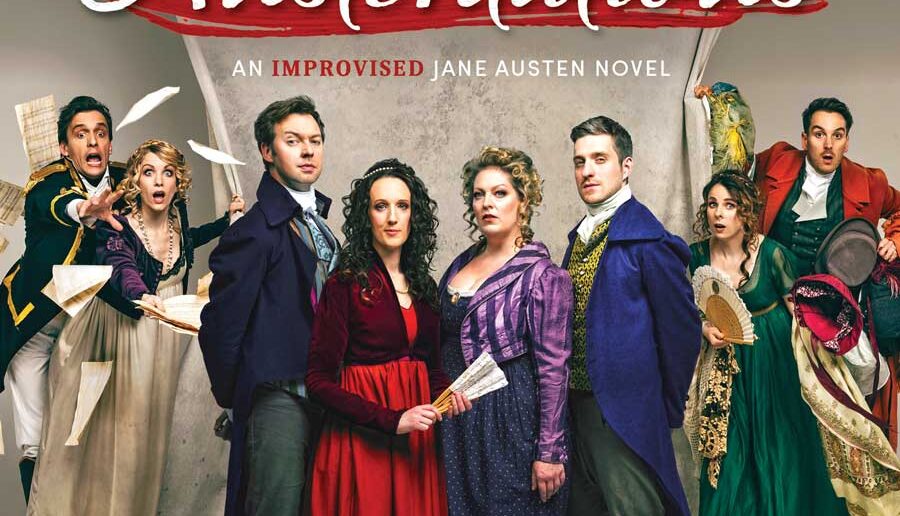 Austentatious is an improvised comedy play starring a cast of the country’s quickest comic performers. Every single show the cast conjures up a brand new ‘lost’ Jane Austen novel based on nothing more than a title suggested by the audience.

Previous ‘lost’ masterpieces have included Double 0 Darcy, Game of Scones and The Wickham Man, and no two shows are ever the same. Performed in period costume with live musical accompaniment, this is a regency treat guaranteed to delight Austen novices and die-hard fans alike.

The truly magnificent cast include Amy Cooke-Hodgson, playing the Queen. She is a versatile actress who has performed in venues across the UK in a variety of roles, both comedic and straight. Recent stage credits include the Queen in the UK première of lost Cole Porter musical Jubilee, a nine-month run as the bar maid in Opera Up Close’s Olivier Award-winning La Bohème, Betty in I Love You, You’re Perfect, Now Change!, Kim in Personals, Ida in Honk! and Catherine in Proof.

Andrew Hunter Murray writes comedy for BBC Two’s QI and for Private Eye magazine. He is one of the stars of BBC Two’s No Such Thing As The News and two-time Chortle Award-winning podcast No Such Thing As A Fish, and he hosts the critically acclaimed Page 94: The Private Eye Podcast. His début solo show Round One was a sell-out at the Edinburgh Fringe.

His many guest appearances include John Lloyd’s Museum of Curiosity Live, Literary Death Match and BBC Two’s Only Connect.

Rachel Parris is an award-winning musical comedian, actress and improviser. Her songs have been played on BBC Radio 4 and BBC 6 Music, and she has enjoyed three highly successful solo Edinburgh runs. Rachel was named The Independent’s One To Watch 2014, and was nominated for a Chortle award.

As an improviser, she has performed with The Comedy Store Players, The Oxford Imps, The Beau Zeaux, Scenes From Communal Living and The Bishop, as well as guesting with Grand Theft Impro and at The PIT and the Magnet in New York. She has appeared on Channel 4’s The IT Crowd and in BBC Three’s Murder in Successville, and presented Thronecast on Sky Atlantic. She also hosts the popular Throneroom podcast.

The show comes fresh from multiple sell-out runs at the Edinburgh Fringe, a weekly residency in London’s West End and a BBC Radio 4 Christmas special. It is not to be missed, lovers of both period dramas and comedies will be taken on a hilarious journey back in time to the Regency era. Austentatious will be appearing at theatres across the country to entertain and astonish audiences in equal measure, visiting Leeds City Varieties Music Hall on the 9th and 10th October.

The City Varieties Music Hall has a history all of its own.  Established in 1865 as a room above a pub for the working class, The Varieties is Leeds’ hidden gem – and the Guinness World Record holder for the nation’s longest running music hall.

The home of the BBC’s Good Old Days, it is still regarded as one of the UK’s finest venues for live comedy, music, variety, and Leeds’ favourite Rock ‘n’ Roll Panto.

Tickets for Austentatious are on sale now from;