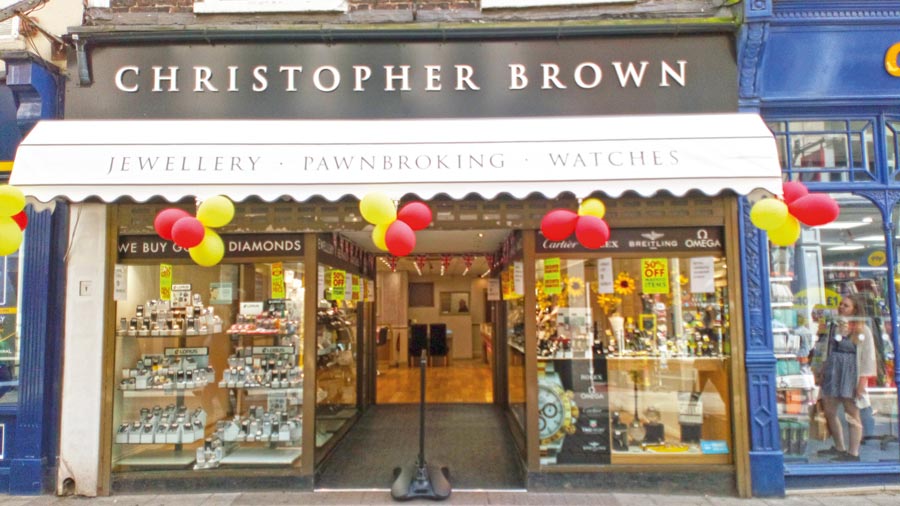 One year on and both stores are flourishing and fully integrated into the family business. The shops are both branded ‘Christopher Brown Jewellers’ offering the full suite of new and pre-owned jewellery and financial services,  increasing our branch network to 8 branches across the North with 5 in Yorkshire.

My family have been jewellers and pawnbrokers for six generations and have been in the trade for nearly 180 years. The original business began in 1840 in Leeds and although that business has since changed ownership I am proud that my business, Brown & Gold Ltd, established in 2011 still continues to grow and I have continued with the family tradition.

While chatting to my father last week we started talking about some of the unusual items we get asked to lend on these days. A customer of our Batley store a few months ago wanted to know if we could lend him £200 against an antique duelling pistol. After a bit of research we were able to establish the pistol was from WH Owen and the gun is a percussion action although it started life as a flintlock circa 1800, which was subsequently converted to percussion probably around 1840. Our research also established that the ‘case’ is made up, possibly from a cutlery box or similar and whilst it displays nicely it actually adds very little; this pistol (termed an ‘overcoat pistol’ by collectors) would have been sold as a pair originally and on its own probably has a retail value of around £895.00 with an auction estimate of £300. The customer was delighted with the fact we could help him out and has since collected the item.

My father, who had been in the trade since he left national service, said he was once asked to lend on a budgie in a cage, a penny farthing bicycle and a horse and trap! I don’t think our new shop in York shop would appreciate having these parked outside!

Interestingly Dad started his career in the old company with a shop in Pontefract called ‘Grandidges’. This shop sold almost everything – a bit like a ‘Grace Brothers’ of its time and specialised in furniture and carpets with jewellery and pawnbroking at the time only being a minor side line. The carpet and furniture trade went to the big out of town outlets and the original shop was sold for development which enabled him to expand the business and open a new Jewellers and Pawnbrokers in Pontefract on Ropergate subsequently closed by the new owners. When I opened my shop in Pontefract last year I could not believe how many people remembered the old business and many even remember my father with great fondness. When I took my father over to see it he was quite emotional and delighted to see the family tradition continuing for another generation. It’s funny how things have a way of coming around!

Today 95% of our loans are on gold jewellery, diamonds and luxury watches such as ROLEX, however we do also lend on electrical items such as smart phones, lap tops and iPads and will consider most things of value. Carbon bikes and iPhones can be just as valuable as a gold chain or a diamond ring, so if these are the greatest possessions of the new generation, then the modern pawnbroker must move with the times.

When you think about it, perhaps things just haven’t really moved on!

To find out more about our jewellery selection and financial services visit our new website www.browndandgold.co.uk