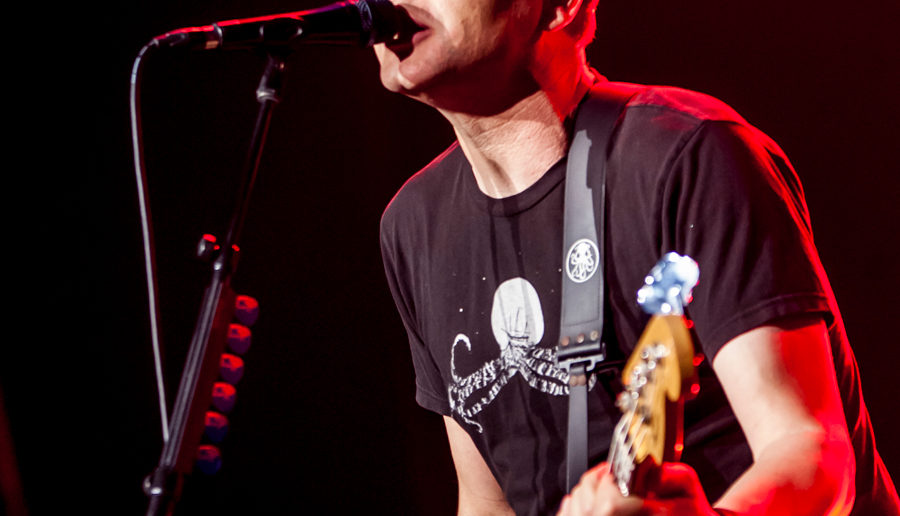 Blink182 exploded on to the scene in 1999, largely on the back of the opus of teen angst All The Small Things. It has not been a smooth ride for fans ever since. Tom DeLonge, Mark Hoppus and Travis Barker worked hard and became the lovable punk band who your parents would hate. They have, largely, kept those fans but with the departure of DeLonge and the addition of Matt Skibba they have added a new one through a more cultured, and dare we say it, mature sound.

Blink succeeded to satisfy both brand of followers at Leeds Arena, though clearly one side missed the childish wit and humour of Blink of old but not by much as their breath-taking set hardly relented to enable time to think! They delivered a masterful one-two with Feeling This and Rock Show and never looked back. It may have seemed like some greatest hits set but much of their best album to date California was there too and it sat very nicely amongst the early, fantastically catchy songs.

It’s difficult not to admire the energy deployed by all of this new Blink 182, this is evident from the absolute devotion of the 13,000 fans here – and the songs both old and new as essentially, they still hark back to teenage feelings of confusion and meaning which we all have had. Skiba works hard and fits in well too. No mean feat after Blink imploded and DeLonge left. It could have left a divided fanbase but instead we have solidarity and all-inclusive Blink 182.

Almost 100,000 have attended three Jockey Club music and racing days at York Racecourse in the past month. Some attended for the races though by the full to bursting crowds at the stage most also came to see Olly Murs, Jess Glynn and All Saints too. Open-air concerts at Haydock Park Racecourse offer an experience unlike any other this summer. Alongside a show-stopping headlining performance by some of the world’s biggest artists, the action kicks off earlier in the day with a six-race card – giving fans the chance to witness powerful equine athletes who are stars, and enjoy the thrilling drama and spectacle of them racing for glory. Olly Murs would never suffer from a divided fanbase. Since Olly shot to fame on ‘X Factor’ in 2009, he has crafted four multi-platinum albums and produced 4 number 1 singles with total record sales exceeding 10 million. His latest studio album ’24 HRS’ was released earlier last month and became his fourth consecutive LP to reach the top spot on the UK charts, becoming the most successful solo artist ever to come from the X Factor. A formidable performer, he has sold out arena tours across the UK and cemented himself as one of the Britain’s very best live acts as he showed here: Afterwards he told us “It was great to get to play tracks from 24 HRS in the sunshine and the crowd were just great.”

The only evening meeting of the season saw six fantastic races followed by a live concert from the artist who first shot into the public consciousness as the vocalist on Clean Bandit’s Grammy Award winning and number 1 hit ‘Rather Be’; Jess Glynne has since become one of the biggest UK breakthrough acts of recent years. Her number-one charting debut album, ‘I Cry When I Laugh‘, has turned double platinum in the UK, making it the highest selling debut album of the past year. Jess is also one of only two British female solo artists to have five consecutive UK number one singles. 2016 was a further massive year for Jess, with a sold-out UK arena tour under her belt plus she was nominated for British Breakthrough Act, British Female Solo Artist and British Single for ‘Hold My Hand’ at this year’s prestigious Brit Awards. Jess said  ‘It was great fun playing York Racecourse. I love outdoor shows and could not wait to share the summer evening with my fans!’

One of the best known all girl bands of all time, All Saints, followed Jess. All Saints (Melanie Blatt, Shaznay Lewis, Natalie & Nicole Appleton) were one of the most successful pop groups of the 1990s, with two multi-platinum albums and record sales more than 12 million worldwide. Their debut album, ‘All Saints’ went 5x platinum and produced 3 number-one singles, including the double BRIT award-winning ‘Never Ever’ which ended up selling over 1.2 million copies in the UK. The band returned with a new album, “Red Flag” and are back performing live to rave reviews. And during their performance it’s easy to see why. Faultless, smooth and so much fun. Here’s to next summer and more from The Jockey Club