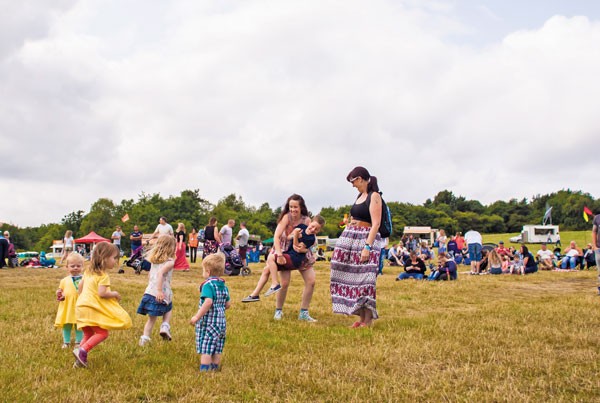 We are in the middle of the festival season and whilst the big festivals such as T In The Park, Glastonbury and Isle Of White may be grabbing all the headlines there are many independent festivals run with dedication and passion that deserve as much attention as these. They are family orientated and to all intents are purposes are the lifeblood of the bigger festivals because once you have been to one of them they infuse the festival bug!

One such festival is held every June in the splendid grounds of Oakwell Manor near Batley. Three stages full of unsigned artists mixed with more well-known headlining acts. In this case The Feeling, Smooched and Cast. However, the real stars of the festival may not be household names yet but were appreciated by a large audience basking in the glorious sunshine.

Izzy Thomas, whose Sell Your Soul EP is making waves and is featured on the soundtrack of a major new film gave as powerful a performance as anybody on the day. Her rasping voice pulling in the largest crowd to the Dome stage.

Leeds band Apollo Junction actually played twice on the day, the second set as support to Cast. They’ve been gaining airplay on national radio recently and their life inspired indie pop is a match for anybody playing the larger festivals. Grace Solero from London have an international feel about them. Not surprising when their membership consists of an Italian, a Welshman, a Californian and a bass player from Sweden. Their inspired rock set was simply magnificent as indeed were most of the bands playing all the stages. So good in fact that the main acts really had to up their game to keep up with them! On the whole The Feeling and Cast did this, though it has to be said that Stooche were slightly disappointing. Nevertheless it was a brilliant day both organisationally and musically. The same can also be said of the SOS Festival.

With a similar perspective on family orientation and giving bands a chance to play a bigger stage is the metal festival SOS. Once again it was the unsigned acts that got the festival banging! Outstanding were Leeds band Chasing Dragons, whom we have featured in Music Notes before. But, they just keep getting better and better with each performance. They were the best band on the bill by a country mile. Their brand of rock is full of energy and melody and as infectious as anything you will hear from more mainstream artists. This band are going places and you can find out more about them at www.chasingdragons.co.uk where you can download the excellent track Broken Jaws for free.

The best festival will be here soon. Thousands of music fans will descend on Bramham Park between the 28th and 31st August. Excitement has been mounting since the announcement of the headline acts in January.

The Libertines are Friday headliners. Mumford and Sons play the Saturday and Metallica are entrusted to end the festival with a head banging explosion of noise! There are two bands on the main stage that we predicted would be when we saw them at the festival last year playing the smaller stages. Royal Blood the Brighton rock duo formed only in 2013 and have already supported the likes of Arctic Monkeys and Foo Fighters.

They had the fastest-selling British rock album of 2014 so the elevation is well deserved.

Perhaps a more surprising appearance on the main stage on the Sunday will be Yorkshires very own Marmozets.

The Bingley Band absolutely astonished the record industry with their success of their debut record The Weird and Wonderful which just about sums up the band! They have worked astonishingly hard in the past eighteen months and they are deserving of every reward that is coming their way at the moment. Catch them on the main stage on the Sunday of the festival. But also keep an eye out on the smaller stages: Main contenders for a promotion to the main stage in 2016 will be the awesome Wolf Alice who play the BBC Radio One stage on the final day of the festival.

A few weekend tickets remain priced at £205: Single day tickets are also available priced at £60 available at Ticketmaster or on the festival web page www.leedsfestival.com