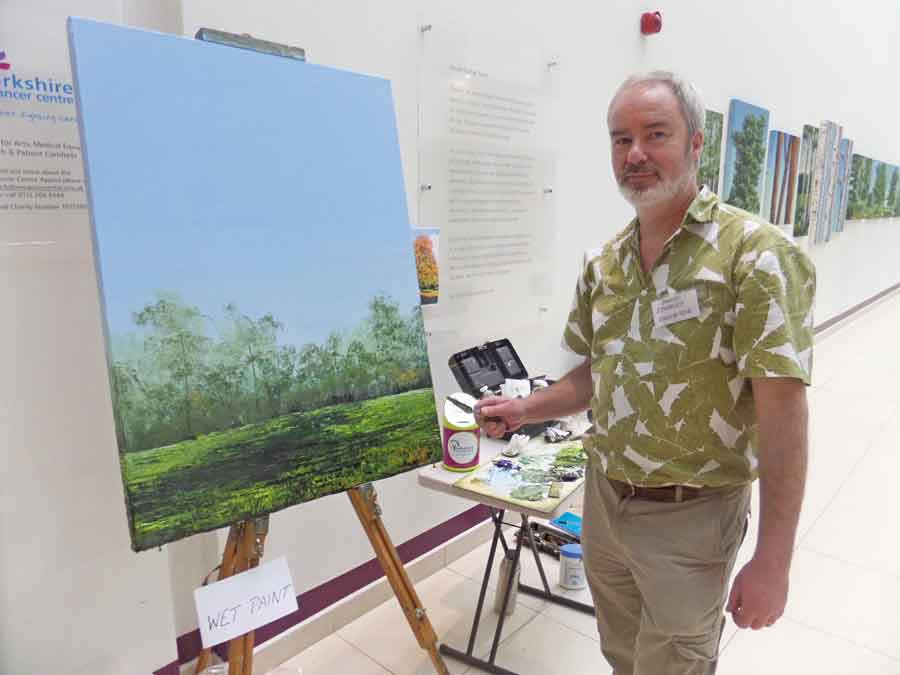 The beauty and splendour of Britain’s woodlands is being brought to the Bexley Wing at St James’s University Hospital, where professional artist David Starley has an exhibition and is doing painting sessions on site.
This is the first time the Bexley Wing – home to the atrium gallery, a regularly changing exhibition which helps raise money for the Yorkshire Cancer Centre Appeal – has hosted this type of live painting by an artist.
David, from Saltaire, near Bradford, has had his work displayed in a range of galleries and locations and was recently Artist in Residence at the Royal Horticultural Society’s Harlow Carr Garden, near Harrogate. He uses traditional oil paints, applied with a knife rather than a brush, to produce a textured, almost sculpted, image.
David is relishing the opportunity to bring his art to the hospital and is already seeing a positive response from patients, visitors and staff alike.
He commented: “This is a very large space indeed, but having experienced a joint show with the Aire Valley Arts Group at the hospital some years ago, I was totally bowled over by the response of the public. People who understandably have serious matters on their minds clearly found much pleasure in looking at, and talking about the paintings.”
As well as carrying out ‘live painting’ sessions with the next two on Thursday 8 December and Tuesday 20 December, between 10.00am and 3.00pm, David’s work can be seen in a wall of trees in the main atrium in the Bexley Wing, which can be viewed every day. The exhibition runs until the end of January 2017.
David is collecting donations for the Yorkshire Cancer Centre Appeal and is donating 25% of any sales made during the exhibition to the Appeal.
Yvonne Holmes, who organises the displays at the atrium gallery, commented: “It’s a delight to have David as our first live painter and there was a fantastic reaction to his first session with many people being fascinated to see his painting technique. The Bexley Wing atrium is already home to live piano playing and that also goes down extremely well with patients, visitors and staff and helps create a friendly and relaxing environment.”