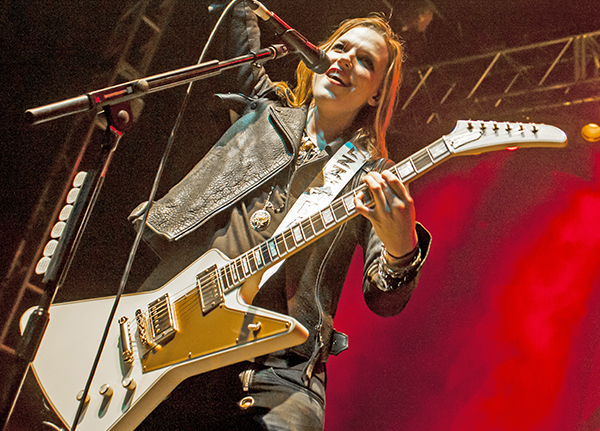 In a month where an argument raged about the lack of females contributing to the Leeds Festival it seems a mite ironic that the best rock record of the year so far is from a female-fronted rock band. Halestorm came to Leeds to promote Into The Wildlife and absolutely rocked the O2 to its foundations.

Lzzy Hale knows how to belt out a tune and hold an audience. Cracking show and no better reply for those who think bands should play festivals on merit. Raw, energetic and utterly memorable it didn’t matter about the gender. It was just brilliant rock music delivered passionately and with abandon.

They have it would seem, learnt from such legends as Thunder and The Stranglers. Both played to full houses and both showed that they have the longevity that so many lack today. Thunder referenced their mightiest times in rock history to the delight of the crowd. So did The Stranglers, but maybe a little less so. Favourites were of course included but their new material is so good that it deserves its place in the set. Both also have their mischievous side and both are ideal blueprints for what a band should aspire to be.

At the other end of the spectrum musically are The Handsome Family and The Unthanks. Both played to packed audiences at The Irish Centre in Leeds. The Unthanks were hauntingly beautiful. A swirling magical set that included most of the new record Mount The Air, their first studio album for four years by the Mercury nominated band.

It was an opulent, exquisite and mesmerising performance. For New Mexico-based husband-and-wife team of Brett and Rennie Sparks (The Handsome Family) it’s clear that the passing of time hasn’t dampened down their taste for the macabre mysteries of Americana folk music. Rennie’s surreal couplets, given added portent by Brett’s compellingly mournful baritone.

Kiesza, won Video Of The Year for ‘Hideaway’, the number one hit shot on the streets of Brooklyn with its infectious nineties street dance moves performed by the kind of people you might actually see on the street. Kiesza just gave a brilliant show at the O2. Of course, she ended the night with ‘Hideaway’, a very smart, catchy and distinctive single. Never thought a song with a chorus that goes ‘oooh! aaaah!’ could be so addictive. Judging on this, I think Kiesza is here to stay and could become an even bigger success than she already is.

Finally a few recommendations. Don’t Miss the Turbowolf Tour – they play the Key Club on the 12th: The Bristol based rock band with a fusion of metal and punk with added electronica, the psychedelic group are something of an enigma – and a truly unmissable live act. Also look out for Laura Welsh. Soft Control is a big record—dramatic crescendos, orchestral arrangements, pounding percussion. Welsh’s voice is undeniably powerful and this record deserves to be listened to

Leeds is also the centre of the opening of the festival season with two big events in May: Live At Leeds, with over 200 bands including the likes of The Cribs playing over the first bank holiday weekend: Our recommendation is to check out the rather brilliant Sunset Suns and Lucy Rose who played a stunning gig at the Brudenell last month. Slamdunk takes over Millenium Square on the 24th May. It’s the tenth anniversary of the event and the bill is simply the best ever!