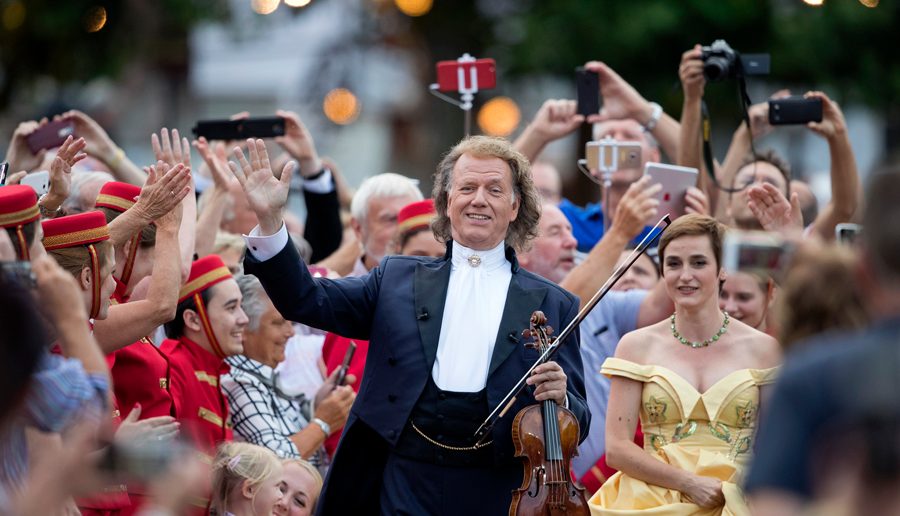 One of the most popular live acts in the world, the King of the Waltz, André Rieu has announced that his 2018 Maastricht concerts will be screened via satellite in over 500 cinemas nationwide across the weekend of 28th – 29th July, as he performs his hometown shows this year with a celebration of love.

‘Amore – My Tribute to Love’, is the renowned violinist’s tribute to his love for music, and his love for both of his families; his wife and children, and of course for his Johann Strauss Orchestra, who he has performed with for over 30 years. It follows on from the release of his album ‘Amore’ last year, which features his own versions of classic love songs from the worlds of popular and classical music.

For this very special concert, André is offering one lucky winner the ultimate musical love dedication – all UK cinemagoers are invited to dedicate one of André’s waltzes to a special loved one. André will personally select a dedication on both nights and will announce the dedication, and the winner, to cinema audiences across the UK. To submit your dedication visit www.andreincinemas.com/dedication

The unforgettable concerts that take place in André’s hometown of Maastricht in the Netherlands are a sight to behold. Set against the incredible backdrop of the medieval town square, fans come annually from all corners of the world to watch André perform with his 60-piece Johann Strauss Orchestra, as well as sopranos, tenors, and some very special guests. The concerts are packed full of humour, fun and emotion for all ages.

André’s annual celebration of music that is like no other is also experienced every year in full by hundreds of thousands of fans in the UK from the comfort of their local cinema. The cinema audiences are also treated to some very special behind-the-scenes extras.

Good Morning Britain presenter Charlotte Hawkins hosts the concert presentation, interviewing fans and sharing the joyous atmosphere that bursts right through the cinema screen – as well as catching André for an exclusive chat the moment he steps off stage!

On welcoming cinemagoers across the UK to his hometown of Maastricht for ‘Amore, My Tribute to Love’, André said: “To be able to bring the concert from my beautiful hometown of Maastricht direct to cinemas for my fans in the UK every year is such a thrill! My orchestra and I get so excited about our romantic open-air shows, it’s just magical to bring it to the big screen.

Music is, as they say, the food of love! That is what this show is all about, all types of love. So, we thought what a wonderful way it would be to celebrate this with my British fans than to invite them to submit their dedications for their loved ones, which I shall read out before a very special song in Maastricht that they will see wherever they may be watching across the UK!

I invite you to join me and my orchestra once again for a fantastic adventure; filled with wonderful music and of course: AMORE.”

André Rieu’s 2018 Maastricht Concert, ‘Amore – My Tribute to Love’, distributed by Piece of Magic Entertainment, will screen nationally in the UK on Saturday 28 July @ 7pm and Sunday 29 July @ 3pm.

Find your local cinema at www.andreincinemas.com

The Yorkshire Reporter has one pair of tickets to the Cineworld White Rose Shopping Centre on either Sat 28th July at 7pm or Sun 29th July at 3pm to giveaway.