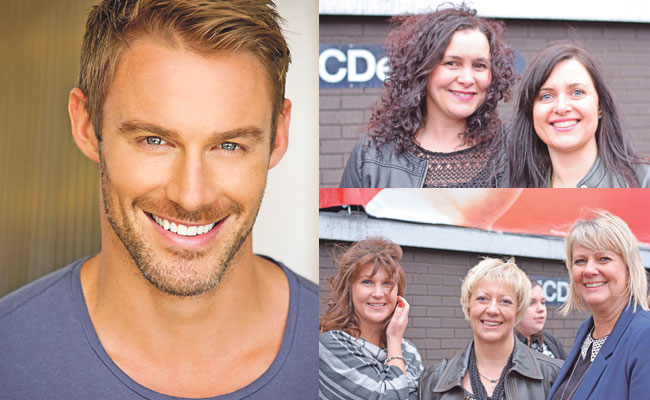 The American TV star and fitness guru Jessie Pavelka hosted an audience of around 200 excited fans on Sunday 23rd February at crossgates shopping centre, giving fitness and wellbeing tips to the lucky crowd as well as staff from the shopping centre who wanted help to make changes in their own lives.

Texan Jessie Pavelka shot to fame through TV shows such as ‘Obese: A Year To Save My Life’ and ‘FAT: The Fight of My Life’. He was also recently on ITV’s Daybreak and is the patron of the UK charity HOOP (Helping Overcome Obesity Problems).
I spoke to a few fans as they waited for the event to start. Vicky, Joanne and Lesley said they have been huge fans of Jessie for some time. They have a 6am training session in Roundhay Park 3 times a week with the trainer Valentine Rawat who was on the same TV show as Jessie.

Megan Smith and Laura Broadbent were also excited to meet the star.

When I asked what they like about him Laura told me “He is a family man who has moved from bodybuilding into more holistic approaches. He encourages you to exercise outdoors not just the gym. Plus he is gorgeous!” Two other fans who like to watch Jessie on TV were Carolyn Clough and Sara Sowden who found out about the event on Twitter.

The evening at the shopping centre was a real community affair with a charity raffle held for Cash For Kids, and local businesses promoting their work with stalls and displays. The audience who had purchased tickets for the exclusive event were treated to a motivational talk by Jessie as well as a question and answer session. There was also the opportunity to have their photograph taken with the star and peruse the stalls with a welcome drink in hand.

Also present at the event was Sarah Le Brocq, a local girl who was helped by Jessie on FAT: The Fight of My Life. So far she has lost over 8st and told us that she stays motivated by setting herself challenges “This year I am climbing Snowden in May, doing the Jersey Triathlon in June and swimming the Channel in August. It is these challenges that keep me going. I still have work to do.” She said that Jessie helped her in the show by keeping her focussed and giving her reassurance that she was doing the right thing.

The event was a huge success, and hopefully the shopping centre will hold more events in the future to help raise money for local charities.