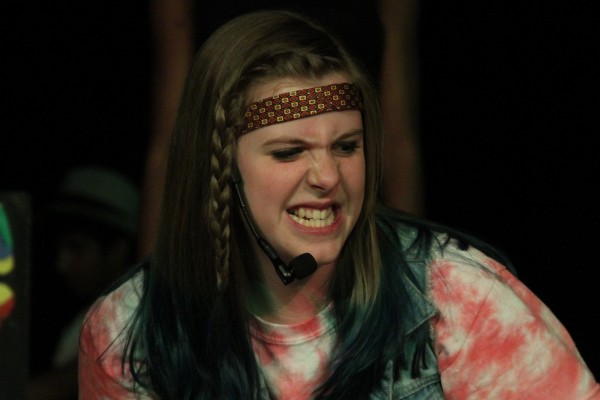 Students from years 7-12 at Allerton Grange school wowed audiences with two evening performances of the musical production of We Will Rock You.

We Will Rock You The Musical by Queen and Ben Elton has been a Westend hit since 2002 and includes many of Queens most famous hits including ‘It’s a Kind of Magic’, ‘Radio Gaga’, ‘Under Pressure’ and ‘Bohemian Rhapsody’. The musical follows the story of Galileo and his ‘chick’ Scaramouche who, along with the Bohemians, fight to bring back Rock music in a world where the evil Killer Queen rules. A world where musical instruments and composers are forbidden, and rock music is all but unknown.

A local casting agent came to see students perform and was delighted with the talent and potential on stage. Cast members have now been given the opportunity to perform in a popular CBBC TV show filming in the area.

The whole cast worked tirelessly with their teachers after school and at weekends to create a successful and memorable evening for all involved. The Gaga Kids were disturbingly sweet, Galileo and Scaramouche mesmerised all with their faultless vocals, the Killer Queen was captivating alongside her side-kick Khashoggi and the Yuppie crew. Meat, Britney, Pop and the Bohemians brought power and fight back onto the stage in their search for true Rock and Roll.

Rachael Jarman Head of Drama said “Allerton Grange School is
lucky to have such musically talented and gifted young performers. It is an absolute joy to part of such a process in producing a show from early auditions and castings right through to final technical rehearsals and opening night. The Drama and Music Department are immensely proud of the success of this years show and the support from all staff, students and the local community”.

For more details about Drama or Music at Allerton Grange please contact Mrs Jarman (Head of Drama) or Mr Mercer (Head of Music).