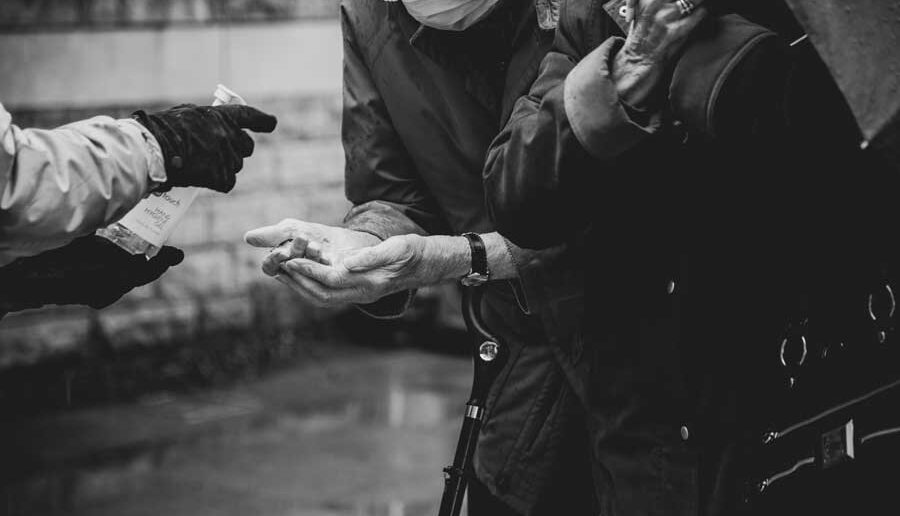 The government published a series of photographs taken by photojournalists working with the NHS, showcasing the people behind the UK-wide vaccination programme – ahead of a campaign urging under-50s to get the jab.

From care homes to cathedrals and museums to stadiums, photojournalists Jude Palmer, Glenn Edward and Liam McBurney toured the UK over the past few months capturing intimate moments during the monumental national effort to vaccinate the British population and end the (coronavirus) COVID-19 pandemic.

A series of unseen photographs capturing the size and scale of the UK-wide vaccination programme were published by the UK government ahead of the new campaign urging under-50s to get the jab. Health and Social Care Secretary Matt Hancock said:

“These incredible photographs show the heroic efforts of thousands of vaccinators and volunteers in every corner of the UK who have given so much to protect the most vulnerable in our society against this cruel virus.

“While there is much to celebrate with over 45 million COVID-19 vaccine doses administered so far, the battle is not yet over. I urge everyone to do their bit – when you get the call, get the jab.”

Photographs include smiling portraits of vaccinators and volunteers, a bird’s eye view of socially distanced patients awaiting their jabs in Salisbury Cathedral, and an elderly couple holding hands at a vaccination site in Ulverston, Cumbria.

“While the pandemic has been an incredibly difficult time in our history, it had to be documented. It’s been an honour to witness the incredible roll out of the life-saving vaccine first-hand and document this in a meaningful, compassionate way.

“The photography project tells many genuine stories of people involved in the vaccine programme and those that have come forward to have their vaccine already – from their smiles, laughs, nerves, and sighs of relief as we get one step closer to a more normal way of life.”

The government has already hit its target of offering everybody in cohorts 1 to 9 – those aged 50 and over, the clinically vulnerable and health and social care workers – and is on track to offer a jab to all adults in the UK by the end of July.

Over 33.5 million people have now received a first dose of a vaccine – over 63.5% of the UK adult population – with 12 million receiving their second dose. This means over 22.8% of the UK adult population have now received both doses of a vaccine – giving them the strongest possible protection from this virus, with over 45.5 million vaccines administered overall.

These never-before-seen images, which illustrate the monumental and collective effort of NHS teams, volunteers and members of the public, have been compiled into a video montage to mark the success of the vaccine programme to date.

They provide an opportunity for people to look back on the programme, reflecting on the heroic efforts to protect those most vulnerable to COVID-19 and look ahead to the second phase of the vaccination programme, which will see all adults offered a first dose by the end of July.

A major new campaign marking the second phase of the national vaccination rollout has been launched tomorrow to encourage people aged 50 and under to get their jab when their turn comes.

Alice Tooley, 25, a Volunteer Service Co-Ordinator at refugee charity RETAS in Leeds, who is featured in the photography said:

“I was invited to get the vaccine because of my frontline work with vulnerable adults. Getting the vaccine was important to me as it meant I could continue my work with asylum seekers and refugees feeling confident that I wasn’t putting them or myself at risk of the virus.

“As younger people my age get called for theirs, I hope they jump at it the way I did so, as a collective, we all play our part in getting back to a more normal way of life.”

“It’s been a real honour to play such a central part in the vaccine roll out programme and witness people’s physical relief as they get their first and second jabs. To save elderly people travelling to the clinic through snow and frosty conditions, I’ve been travelling round on boats and by car to reach the most remote corners of Northern Ireland.

“Most overwhelming has been to see how grateful everyone has been for getting their vaccine and finally seeing some light at the end of the tunnel.”