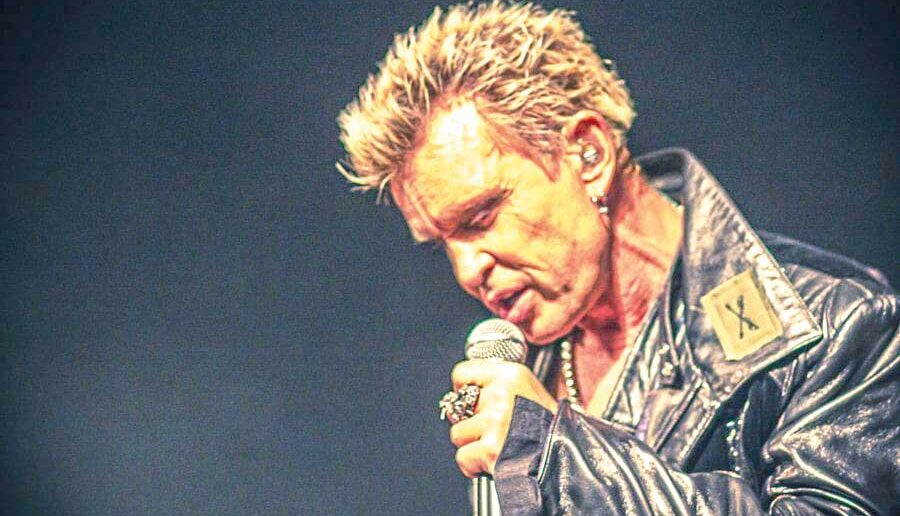 A Reminder Of Happier Times!

It appears that in terms of music people are using it as a type of security blanket. And this is set to continue into next year.

Following the release of The Roadside EP Billy Idol Returns to stage in the UK with The Roadside Tour 2022 – 6 Arena shows in June featuring very special guests The Go-Go’s. The tour arrives at the First Direct Arena Leeds on Tuesday 21st June 2022.

This will be Idols first live shows in the UK since 2018 and he’s looking forward to hitting the road over here again. For forty-five years, Billy Idol has been one of the faces and voices of rock’n’roll, with an artistic resume to match the brilliant light of the image. First as the camera-ready front man for Generation X, between 1977 and 1981 Idol emerged with three albums that made positivity, emotional depth, and high pop synonymous with punk rock.

In 1982, Idol embarked on a remarkable transatlantic/trans-genre solo career that integrated clubland throb, wide-screen depth and drama, rockabilly desperation, the bold and simple lines of punk, and rock’n’roll decadence. Embracing the new MTV music channel, videos for White Wedding, Rebel Yell and Eyes Without A Face established Idol as one of the iconic performers of his generation, a position he still holds today.

Support will come from The Go-Go’s Formed in California in 1978, The Go-Go’s became the first all-female band writing their own material and playing their own instruments to top the U.S. Billboard album chart with their multi-platinum debut, Beauty And The Beat.

Following the completion of a sold-out tour across the UK, ERASURE (Andy Bell and Vince Clarke) has, due to overwhelming demand, added new UK dates for May 2022. The chart-topping duo have just finished a run of sold-out UK dates that included The O2 in London, and these newly announced dates follow their recently rescheduled European shows – they play. – Leeds, First Direct Arena on 26th May.

There is also some, shall we say, younger bands working their way across the UK in 2022. Take, for example, Oh Wonder. The band returned with their new single ‘22 Break’, the title track from the unique duo’s surprise new album this follows 2020’s ‘No One Else Can Wear Your Crown’, and back-to-back top 10 albums from the band who have – on their own distinct terms – become one of UK pop’s more unsuspecting success stories (2.7 billion streams, 1.7 million adjusted album sales, and vocal fans in the likes of Billie Eilish, who covered ‘All We Do’ during her Apple documentary). By their own design, Oh Wonder have always flown a little below the public radar. Not many bands can make a break-up album that culminates in them getting married – but then again, Oh Wonder have never been like other bands. Coming out of ‘22 Break’ and all the soul-searching that it forced them to do, Josephine and Anthony finally got married in August this year., and to begin a brand-new chapter in the story of Oh Wonder. Rescheduled for February next year you can catch them at The O2 on the 17th.

Pale Waves have announced their 2022 UK tour, kicking off on February 11 in Bristol and arrives at the O2 in Leeds on 17th February. The tour is in support of the highly acclaimed second album Who Am I? Who Am I? features singles ‘You Don’t Own Me’ ‘Easy’, ‘She’s My Religion’ and  ‘Change’ and was recorded primarily in Los Angeles alongside producer Rich Costey (Muse, Foo Fighters, Sigur Rós), before the Coronavirus lockdown in 2020 forced the making of the album to go virtual, with Heather and Ciara remaining in LA and the rest of the band returning home to record their parts in their bedrooms. Formed of frontwoman Heather Baron-Gracie; drummer Ciara Doran; guitarist Hugo Silvani and bassist Charlie Wood, Pale Waves released their debut album My Mind Makes Noises in September 2018, by which time they had already won the NME Under The Radar award, made the BBC sound of 2018 shortlist and toured with Dirty Hit label mates The 1975. When the album charted at 8 on the UK album chart, Pale Waves were seen as more than a breakthrough act and instead one of the most important emerging indie-pop bands in Britain.

Bryan Adams the renowned Canadian singer-songwriter. Some of his best-known songs are ‘Heaven,’ ‘Everything I Do,’ and ‘Here I Am.’ He had an innate interest in music. From his early childhood, he started displaying his talent in music. As a teenager, he was so passionate about music that he worked as a dish washer to accumulate money to buy a guitar. He rehearsed regularly and even worked with bands at bars and clubs. He got an opportunity to perform as a lead singer in the newly formed band ‘Sweeney Todd’ when their lead singer Nick Gilder quit the band to pursue a solo career. But the turning point in Bryan’s life was when he got acquainted with songwriter Jim Vallance. Their collaboration in song-writing became a long lasting one and the duo penned some award-winning songs. Bryan and Jim wrote songs and even produced some albums, the album ‘Bryan Adams’ being the first. This accomplished artist achieved his first major hit when the album ‘Cuts Like a Knife’ hit the music stores. His position was further cemented in the international music arena with the release of his album ‘Reckless.’ He then continued to produce songs that became huge hits among critics and music lovers all over the world. You can hear them all live in 2022 at Scarborough, Open Air Theatre 1st July and Harewood House on the 10th

Having now completed his third full decade as a recording artist, The Divine Comedy, aka Neil Hannon, today announces the treasure trove that is Charmed Life – The Best Of The Divine Comedy – a collection of his finest moments, out February 4th 2022.

A 24 track career-spanning roster of hit singles and fan favourites, compiled by Neil and remastered at Abbey Road Studios, Charmed Life includes monumental tracks ‘National Express’, ‘Something For The Weekend’, ‘Songs of Love’, ‘Our Mutual Friend’, ‘A Lady of A Certain Age’, ‘To The Rescue’ and ‘Norman and Norma’. It also features brand new track ‘The Best Mistakes.’

“I’ve been luckier than most,” Neil Hannon reflected. “I get to sing songs to people for a living and they almost always applaud. So, when asked what to call this collection I thought of Charmed Life. I like the song and it rather sums up how I feel about my life.” The Divine Comedy will be touring the UK and Ireland from April 2022 including a show at the York, Barbican on 30th April 2022. Neil says: “I am so looking forward to playing live again. The last couple of years have been a reminder of how much it means to me personally. It really is my favourite thing. And it seems fitting that we will be coming back with a greatest hits set. You know in case everyone’s forgotten who I am and what we do!”

“The Blues came calling first, but rock was always waiting around the corner. Well, it would be, wouldn’t it? Coming from the deep south, it was inevitable, but living in the deep south of a major Yorkshire City, there’s a gritty hard edge to life”! Chantel McGregor tells us

A female guitar prodigy, Chantel was told by a major label that she had a “great voice, but girls don’t play guitar like that!” Wisely ignoring their comments, she enrolled at the Leeds College of Music and became the first student in the college’s history, to achieve a 100% pass mark at BTEC, with 18 distinctions. Chantel then pursued further education and left with a First-Class Honours degree in Popular Music and a coveted prize, the college’s musician of the year award.

Chantel released her highly anticipated second album, Lose Control, in October 2015 on her independent boutique label Tis Rock Music, this being the follow up to her critically acclaimed 2011 debut album, Like No Other.

After years of touring and festival appearances, Chantel returned with a vengeance with ten new songs that not only salutes contemporary rock, but shows her gradual transition from conventional Blues to a harder, bigger and bolder rock sound with progressive influences. Catch a stunning performance at The Crescent York on 7th December.