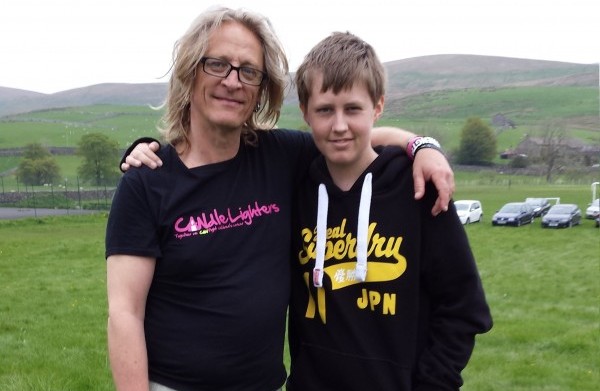 To celebrate the start of 2015, leading Children’s Cancer charity Candlelighters is inviting people to join Team Candlelighters for their exclusive Yorkshire Three Peaks Challenge – a great way to commit to your New Year resolutions.

As part of their exciting calendar of fundraising, Candlelighters have launched registration for their exclusive Yorkshire 3 Peaks challenge; an internationally renowned walk through the stunning Yorkshire countryside. The Challenge will take place on Saturday 23 May 2015.

Phil Gent, from Bradford, dad of 16 year-old cancer patient Casey, completed the Candlelighters Yorkshire Three Peaks Challenge in 2014 in support of his son.

Casey, who will skydive in aid of Candlelighters in March 2015, was diagnosed with ALL (Acute Lymphocytic Leukaemia) on 17 November 2011, aged 13, after several weeks of sickness and tiredness. He said:  “I was immediately transferred from the Bradford Royal Infirmary to the Leeds General Infirmary to start intense chemotherapy. I was in for that month receiving chemo and other medication before eventually being discharged on the 17 December 2011, all seemed to be well over Christmas apart from the small side effects of meds. However after collapsing at home shortly after the New Year I was admitted to hospital yet again, I went through just less than a month more of chemo and feeling horrible before I was moved to the PICU (Paediatric ICU). I was in there for exactly a month in the same room hooked up to a ventilator. I felt like I had every infection and every type of medication under the sun before the doctors found out I had a rare disease called HLH.

Luckily I was one of the few survivors of this disease and I went on to spend another 4 months in hospital having even more treatment and learning to walk again due to complete muscle wastage, this took a lot longer than I remained in hospital for and I was back on my feet by around September 2012. I finished physiotherapy around 6 months later. From there it has been a gradual recovery and I’m currently in school much more often and I’m going to hospital once a month for check ups!”

Phil said ‘’I am a keen walker and this was my chance to say thank you to Candlelighters for all the support they have given our family since Casey was first diagnosed with ALL. The day was made fantastic by the support of the volunteers and staff along the route, the friendliness of the group, and completing the challenge in a good time. If challenging yourself, supporting a great cause, helping your local community or meeting fantastic new people are on your bucket list, sign up now.’’

Casey is also taking on his own challenge in aid of Candlelighters. He will be taking part in Candlelighters first ever organised skydive on Sunday 29 March 2015 at Hibaldstow Airfield, North Lincolnshire.

Putting a different spin on signing up for the challenge, Noemie Salvaudon, Events Fundraiser at the charity, commented “This is the second year we will be taking to the hills and we know it’s a challenge that features on many people’s bucket list.  Registration for the event is £50 and we want to encourage people to register as a way to commit to their New Year resolutions.  Not only is this a great event to look forward to but you are also supporting children who have been diagnosed with cancer and their families across Yorkshire – a wonderful motivation.”

Candlelighters was set up over 40 years ago by parents of children with cancer for families affected by childhood cancer.  Jo Shepheard, charity director added “When a child is diagnosed with cancer, lives are turned upside down in an instant. Not just for the child but for their parents, siblings, family and friends. Priorities change and everyday concerns suddenly seem trivial. Getting well again can be a long and challenging journey, physically, emotionally and financially.”

Participants will be asked to fundraise for this great cause which has been funding research, equipment and more across Yorkshire for many years. This is an exciting time for the charity as they launch their new Family Support Hub later this year.