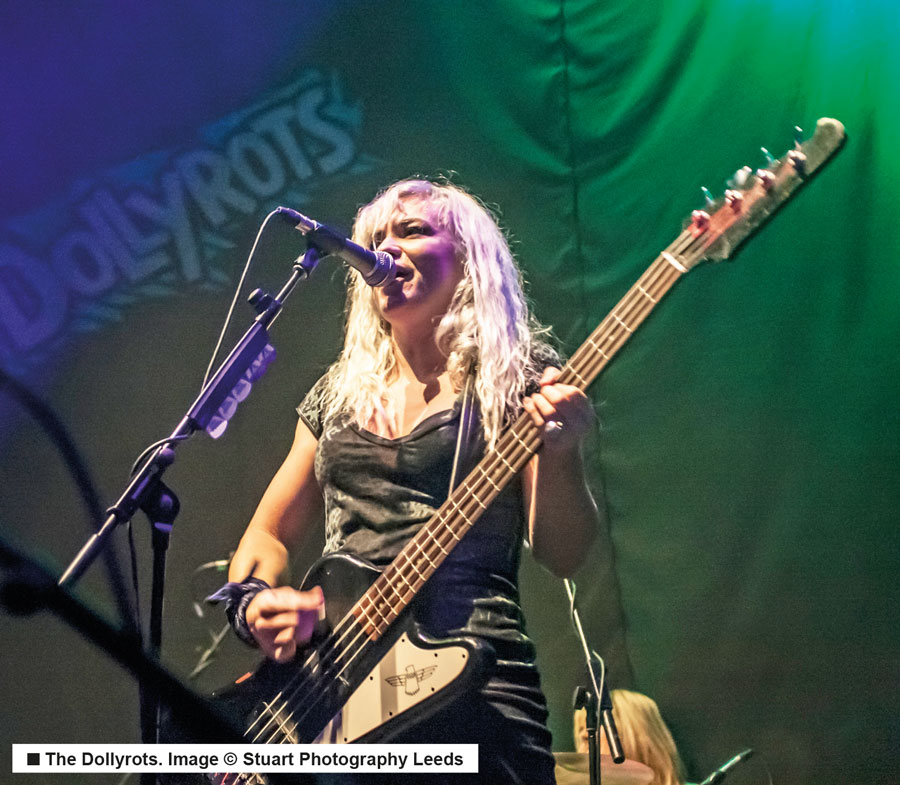 A mixture of the old and new has been the order of the day in live music in Yorkshire. Well known, less known and completely unkown have always rubbed shoulders in the county that caters for all tastes: Exemplified this month through punk, post punk and classic rock!
The Dollyrots have been around for a long time. Indeed they were formed in 2001, have five excellent records behind them, a storming live record and DVD and yet some of you may not have heard of them but after supporting Bowling For Soup for the second time they have at last built up a momentum that shows no sign of stopping.

They have a unique marque of pop-punk delivered with style and panache by lead singer Kelly Ogden. At Leeds O2 Academy they were full of boundless energy, despite this show being towards the end of an extensive UK tour: They sure know how to belt out a song, usually at a juggernaut speed. They did pause for breath halfway through the set for a more blues based number without detriment to their raison d’etre. Check out their new EP Mama’s Gonna Knock You Out to show you just how good The Dollyrots are!
Of course most had to come to see Bowling For Soup. They have held the UK in fondness having toured almost thirty times. Not that it would seem that people are tiring of them. This is a testament to the thought they put into both their musical set and indeed their banter. They did of course treat the crowd to all their greatest hits which have over their lifetime become timeless punk classics: 1985, Emily and creating the biggest reaction of the night, Phineas and Ferb Theme Song: They put the fun back into music when at times music takes itself too seriously.
The Fun Lovin' Criminals may not have had a chart hit for 15 or so years with lead singer, Huey Morgan, a permanent fixture in the BBC broadcasting planner. However, there is nothing like revisiting an iconic classic that changed our perception of what constitutes a genre. At the O2 the trio mainly prosper in sustaining their variety of mellow groove of New York rock, funk, hip-hop and even punk when they perform in full the classic album Come Find Yourself: An album that painted a vivid, living landscape of their native New York. Songs like “King Of New York” about mob boss John Gotti, “The View Belongs To Everyone” and funk-laden 1996 hit, “Scooby Snacks” work splendidly in merging Morgan's brilliant guitar work and throated intonations with multi-instrumentalist associate founding hipster Brian “Fast” Leiser. They worked through a gargantuan set of twenty songs played with a sense of fondness for the past and misspent youth! Brilliant. Eliza and the Bear start as they mean to go on. ‘Lion’s Heart’, is a thumping joyous track and an immediate crowd pleaser from the evidence of those joining in.
They perform with an energetic gusto interspersed by frontman Dan Clark's natural friendliness: It is clear they are glad to be there and enjoying what they are doing.
The music has an unswerving and compact bubbly base without unattractive repetitiousness. Played live, there is an exciting raw edge to their performance. The jubilant ‘Light it Up’ is a favourite with all hand in the air from the crowd who happily get out their phone torches to sway when asked.
Eliza and the Bear have a sound that is determinedly recognised and their stage craft commendable, the set is essentially a confident comprehensive study of their musical catalogue. This works marvellously well and consequently the new material, which we feel is their strongest yet is therefore greeted enthusiastically. They finish, with It Gets Cold: An anthem of a track that is surely set to be a summer festival favourite. Top notch! And a feeling that this is only the start.
Thunder started a long time ago, 1989 to be exact but have just released what critics consider their best ever LP Wonder Years. Moreover, they template a work ethic that younger bands like Eliza and the Bear are clearly following. They tour almost endlessly and are currently selling out arenas of thirteen thousand capacity easily. Sheffield was the latest where they gloriously lavished two hours of polished rock.