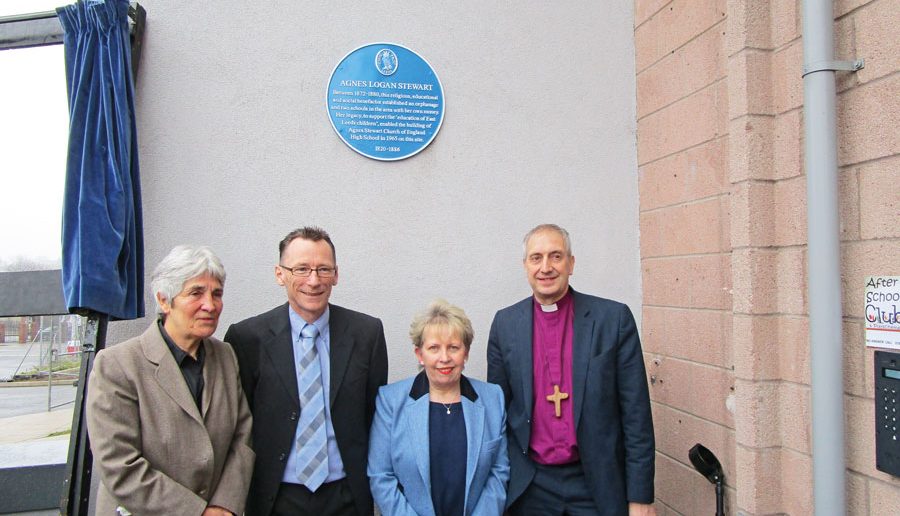 Last month we looked at the 166th recipient of the Leeds Civic Trust Blue Plaque, William Gascoigne. Now following hotly on the heels of Gascoigne, a plaque for Agnes Logan Stewart, the 167th recipient, was recently unveiled by the trust. The plaque has been generously sponsored by the Diocese of Leeds. Agnes Logan Stewart was born in London in 1820 the eldest daughter of wealthy Alexander Stewart and Agnes Marshall. From London, the family moved to Woodford in Essex when Agnes was still quite young. It was here that she developed a liking for teaching and took an interest in helping in the local school, as well as teaching her younger sisters at home.

Her boundless energy enabled her to rise early in the morning and keep regular hours for reading and study as well as having a good social life, dancing being one of her interests. At the age of twenty-three she appears to have given all this up in readiness for a life of devotion to those in need.

She and her family moved back to London when she was about thirty and her time was spent administering to the poor of the district. She attended church regularly at St Paul’s in Knightsbridge for a time, and then to All Saints in Margaret Street where she was seen regularly attending Mass early in the morning, and Evensong later.

After her father died in 1857, she went to Frome School in Somerset and devoted herself to the orphanage for girls there. The inheritance from her father gave Agnes the chance to really set to work and put the money to good use. After leading a sisterhood in Frome for a number of years, it is thought an advertisement in the Church Times in March 1871 prompted her to move to Leeds. The advertisement read ‘Wanted, ladies to work in the Parish of St. Saviour’s Leeds with a view to Sisterhood. Must have some private means’.

She arrived in the city and immediately bought three houses at Knowsthorpe, had them knocked into one and founded an orphanage for girls. Two years later, a school for infants was funded out of her own money in South Accommodation Road. It was at first called Cross Green National School later becoming St Hilda’s built at a cost of £1,150 and provided two hundred and twenty places.

Another school was built in 1880 and Mother Agnes’s generosity shone out once more by maintaining it out of her own pocket. We also know that she was a very private and modest person known by the fact that no record of her claims and deeds were preserved except Hilda’s Church where regular donations were signed ‘Anon.’ At St Saviour’s it was always said that “We give half pints of beef tea, Mother Agnes gives quarts.” Her generosity to the orphans of St Saviour’s is evident when she would give a sovereign and say “Here take this, but mind you don’t say anything.” Her sudden death on April 30th 1886 age sixty-five came as a great shock, for even to the end of her life she worked harder than most. Sister Agnes lies in the churchyard of St James’s in Seacroft, and the monument to her was paid for by her bible class which can be seen just over the church wall on York Road.

“Agnes Stewart was a remarkable woman. She left her home and family in the South of England to live in Leeds. She lived simply, and spent her time and considerable wealth caring for children who were living in poverty in East Leeds. She deserves to be remembered.”

“Many Leeds residents who remember Agnes Stewart Church of England High School will be unaware of the life and generosity of the woman the school was named after. We are delighted to mark her important legacy to the poor of Leeds by unveiling this plaque.”