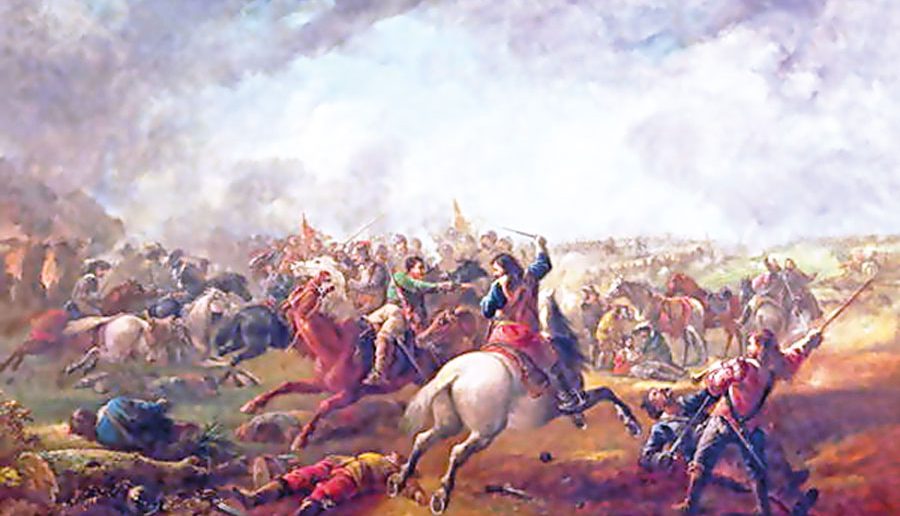 ■ The Battle of Marston Moor, by J. Barker
Features

Recently, Leeds Civic Trust unveiled its 166th Blue Plaque in the city, this time to commemorate William Gascoigne, astronomer and inventor. Through his inventions of the telescopic sight and micrometer, he paved the way for such historical figures such as Isaac Newton to make their mark. Even to this day, astronomers can work with precision due to his inventions. William Gascoigne was described in his day by the first Astronomer Royal, John Flamsteed as an:

“ingenious a person as the world has bred and known”.

William Gascoigne was born in Middleton, Leeds about 1611, the son of a minor country gentleman, Henry Gascoigne of Thorpe-on-the-Hill in Rothwell parish, and his wife Margaret Jane, daughter of William Cartwright. Little is known about his early life and knowledge of his education is sketchy.

During the late 1630s, he worked on a ‘Keplerian’ optical arrangement named after the astronomer Johannes Kepler, when a thread from a spider’s web became caught at exactly the combined optical focal points of the two lenses. On looking through the arrangement, he saw the web sharp and bright within the field of view. Gascoigne realised that he could more accurately point the telescope using the line as a guide, and this led to him inventing the telescopic sight by placing crossed wires at the focal point to define the centre of the field of view.

He then added this arrangement to a sextant modelled on the instrument used by the 16th century Danish astronomer, Tycho Brahe, although Brahe’s sextant was only a naked-eye instrument, Gascoigne’s had a radius of five feet and could measure the distance between astronomical bodies to an unprecedented degree of accuracy.

He soon realised that by introducing two points, whose separation could be attained by using a screw, he was able to measure the size of the image enclosed by them. Gascoigne used the known pitch of the screw, knowing the focal length of the lens that produced the image, he was able to work out the size of the object, such as the planet’s or the moon to a greater degree than ever before.

About 1640 he met the astronomer William Crabtree who made astronomical observations from Gascoigne’s home and his attention was grabbed instantly. On his return to Broughton near Manchester, he wrote to him and asked if he could get hold of such instruments. On December 28th Crabtree wrote to him saying:

“My friend Mr Horrocks professeth that little touch which

him in an Extasie between Admiration and Amazement. I

beseech you Sir, slack not your Intentions for the Perfection

of your begun Wonders.”

Unfortunately, Horrocks died in 1641 never having tried out the instruments, but Gascoigne and Crabtree used them to prove Horrocks’s theories about the elliptical orbit of the moon.

William Gascoigne’s work was unfortunately cut short by the English Civil War which broke out in 1642. He received a commission as an officer in King Charles’ army, but was killed at the Battle of Marston Moor on July 2nd 1644. He was only about thirty-two years old, his actual birth year varies according to different sources.

David Sellers FRAS and biographer of Gascoigne and unveiler of the plaque said:

“Although his name is known by astronomers, his role as

recognition. I hope that this plaque will help to achieve this.”

“Astronomy was the first high-precision science, and owes

its huge advances- from the 17th century until today – to

successive improvements in instruments and techniques.

William Gascoigne is one of the great pioneers. He deserves to

honour his memory and commemorate his all-too short life.”

“We are grateful to David Sellers for bringing this

important scientist to our attention, and were

to support his proposal for a blue plaque. The fact

that a number of scientific organisations have generously

provided sponsorship, demonstrates what an important