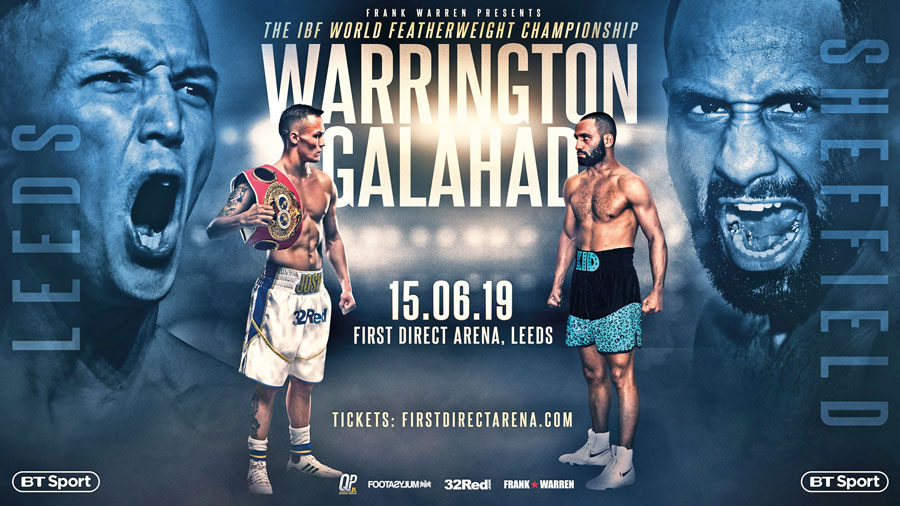 Huge anticipation is building as Warrington’s second title defence on the 15th June gets closer. The World Title clash against mandatory challenger Kid Galahad has fans looking forward to a Yorkshire derby and Leeds Warrior Josh is training as hard as ever, determined to prove that his city is the best in the county by retaining the belt.

Tension is increasing between the two fighters, although it must be said that Galahad doesn’t have much to say for himself – at the official press conference, he seemed to let trainer Dominic Ingle do all the trash talking for him. Last month the pair came face to face during half time at the Leeds United v Sheffield Wednesday game and again contender Galahad was very quiet. He did not take his eyes off Warrington, but never uttered a word, even as Josh taunted him saying “Do you fancy me or something? You can’t take your eyes off me!”

In interviews Galahad has spoken out though saying he knows it is now or never for his title shot, after becoming mandatory challenger last October when he beat Toka Kahn Clary. He said “I don’t believe its an easy fight. But style wise he knows, his dad knows, and Frank knows that I am all wrong for him.”

Josh’s co-trainer Nick Manners who owns Precise Accurate Training on Roseville Road said, “We certainly aren’t taking for granted Galahad’s right and position as mandatory challenger. We as a team know it is much easier to make mistakes when at the top so we will leave no stone unturned in ensuring our path towards greater title honours continues. All Ingle fighters pose a threat as they are very well trained and have a good pedigree historically, but the Leeds Warrior will continue to work to win!”

Our team here at the Yorkshire Reporter have supported Josh Warrington since the early days of his career, and we will certainly be cheering him on next month as the crowds once again raise the roof of the First Direct Arena. Come on Josh!

Tickets for Warrington v Galahad available via
www.firstdirectarena.com and are priced as below: