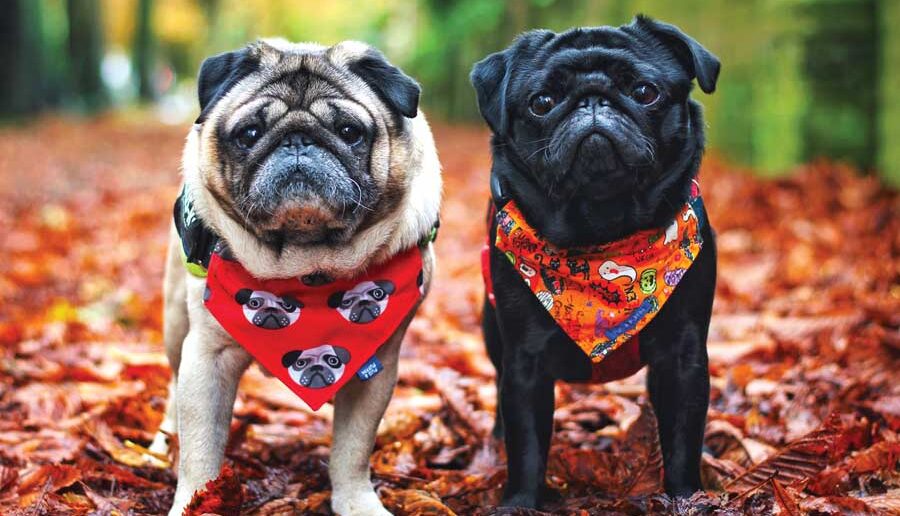 10 Of The Most Common Dangers For Dogs In Autumn

As the leaves start to change colour and the air is getting cooler, autumn is the perfect time to enjoy the great outdoors with your beloved four-legged friend.

But this season comes with a unique set of challenges for dog owners, which is why Head Vet at tails.com Sean McCormack wants to share some advice with dog owners on why they need to be extra vigilant around this time of year.

So, before you grab your walking gear, here are Sean’s tips on avoiding the most common risks our dogs face this season, so you can keep them safe no matter what you get up to.

Sean McCormack, Head Vet at tails.com on the dangers of autumn;

“Autumn is a wonderful season, both for humans and dogs. But with a change in season comes a change in foliage and seasonal items growing that you should be wary of around your dog.

“What we have to remember as pet owners, is that sometimes the beautiful flowers and crops that grow in autumn can be quite dangerous for our animals.

“Our four-legged friends get themselves into lots of mischief and since they investigate their surroundings with their nose and mouth, toxicity is extremely common.

“In autumn, there are lots of dangers lurking both inside and outside of your home for your dog. Recognising what to keep your pup away from is important in keeping them safe and avoiding a trip to the vets.”

Conkers And Acorns Can Be Extremely Toxic To Dogs

“Acorns and conkers, which fall from trees between September and November, might be a delicious treat for squirrels and other wild animals, but they can be extremely toxic for dogs.

“Many pet parents do not realise that they can cause vomiting, diarrhoea, abdominal pain and lethargy when our furry friends decide to chew or swallow them.

“You can usually recognise the signs between one and six hours after ingestion, but in some cases, it can be delayed for a couple of days. Signs may be noticeable in your dog’s vomit or stool, but another less common symptom is a rash or swelling on the eyes or around the lips.

“Keeping a close eye on your dog when out exploring in autumn, is the best way to avoid poisoning. But if you suspect that your dog has swallowed an acorn or conker, it is important to seek veterinary advice straight away”.

Fallen Fruit Can Be Fatal

“During autumn, the unpicked fruit from trees will fall to the ground and it’s only natural that your dog will want to investigate. But dog owners need to be aware that some fruit such as apples, plums and other stone fruit can be fatal to your pet.

“In particular, it is the cores or stones of the fallen fruit that can cause the problem causing dizziness, breathing difficulties, hyperventilation, shock, sickness and diarrhoea.

“If you have an apple tree in your garden, ensure you pick any fallen apples before your pet does. Your dog can have a toxic reaction to the alcohol which is produced by fermented fruit, and this can cause severe vomiting and illness”.

Salt On The Roads

“Rock salt is a mixture of salt (sodium chloride) and grit and is an effective way to reduce ice build-up on roads during the colder seasons.

“However, road salt can be extremely dangerous to dogs, as it can irritate the dog’s skin, causing dryness, cracking and even burns to a dog’s pads. Even more dangerous for dogs, if they lick it from their paws or fur, they can ingest the chemicals, which can be toxic.

“Symptoms of salt poisoning include drooling, vomiting, diarrhoea and loss of appetite. In more severe cases, it can result in seizures and even death.

“This is why dog owners need to clean their pet’s paws after coming home from a walk in autumn and winter”.

“When autumn and winter roll around it brings freezing weather with it. Along with the cold comes another danger for our pets; hypothermia, which is an extremely dangerous drop in body temperature.

“Hypothermia can be life-threatening for dogs with short and thin hair, small dogs, puppies, elderly dogs and dogs with chronic illnesses.

“​​The first symptom of hypothermia is excessive shivering, which is followed by lethargy. If your dog is displaying signs, call the vet immediately, and move them to a warm area, then warm the body by covering them in hot water bottles, blankets or towels.

“However, trying to keep your pets toasty warm in the home can be dangerous. Household heating systems might be comforting to dogs, but they put dogs at risk of overheating and burning their fur and skin.

“Gas heaters and fireplaces can also cause smoke inhalation and carbon monoxide poisoning. To protect your pup, limit the time they spend in front of the heater and never leave them alone with a heating system switched on”.

“As the temperature starts to drop in autumn, households turn on their central heating which could prompt a flea infestation to erupt as flea eggs hatch in the warm and humid environment.

“The best approach is to use a monthly flea product from your vet. There are lots of anti-parasite medications available so it’s best to discuss your dog’s risk factors for other parasites such as lungworm and ticks and ensure your dog has full protection.

“During autumn, check your pet’s coat regularly for fleas and ticks. If fleas are left uncontrolled they will rapidly breed and cause a heavy infestation”.

“While it’s fun to run through a big pile of leaves on the floor, rustling around in them can be dangerous for your furry friends – especially if they have been laying on the floor for a while.

“Sharp sticks and branches can be hidden in the pile of leaves and can cut or wound your dog, so keep them well clear on your autumn walk.

“When leaves are left on the ground, they start to decay and contain bacteria and fungus, which can be harmful to your dog.

“Rats and mice tend to breed during the warm summer months, with means, come, autumn, infestations are more common.

Poisons that are spread to get rid of rats and mice are designed to be harmful, so it comes as no surprise that these chemicals can be extremely dangerous to our dogs. Depending on the type of poison your dog has consumed, the symptoms can vary.

The most common side effects include lethargy, difficulty breathing, pale gums, coughing (with blood), vomiting (with blood), bloody nose, swelling or bumps on the skin and bleeding from gums.“

“Chilly autumn mornings can lead to frosty windscreens, and many car owners will use antifreeze to clear the ice.  As the ice melts from your car, the antifreeze will mix with the water, which can be harmful if your dog likes to drink from puddles.

“Antifreeze can cause damage to your dog’s kidneys, even after a small amount has been ingested.

“The dangerous chemical in antifreeze is ethylene glycol, which has a sweet taste that dogs enjoy. So it’s important that if you see any liquids leaking from your car, keep your dog away and clean them up straight away.

“Once consumed, dogs become wobbly or fall over. The back and kidney area can become painful, and they may experience vomiting, dehydration and increase urination.

“After a couple of hours severe acute kidney failure sets in and they display signs of lack of appetite, diarrhoea, drooling, halitosis and seizures”.

Slugs And Snails Can Carry Lungworm

“Lungworm is a parasite which lives in the heart and blood vessels of the lungs. Left undiagnosed or untreated, lungworm infections can rapidly prove to be fatal. Dogs can become infected when they are sniffing around where slugs and snails occur.

“In autumn there are lots of slugs and snails on the move in our gardens, parks and countryside, which is why autumn sees a rise in new lungworm infections. Although the greatest risk of infection comes from a dog directly eating a slug or snail accidentally or deliberately, even coming into contact with their slime trails can be a source of infection.

“Curious puppies and younger dogs are at the greatest risk as they are more likely to investigate and eat a slug or snail. But even older dogs can become infected if snails have crawled on their food or water dish for example”.

“With a humid and wet climate, autumn is the perfect condition for wild mushrooms to grow. While the majority of mushrooms growing in British woods and grassland are harmless to dogs there is a number that can produce toxins when consumed.

“If your dog eats a harmful mushroom they are likely to experience violent vomiting, as their body attempts to remove any toxins from the system. It’s important to contact your vet if you think your pet has eaten any mushrooms when walking in autumn.

“The toxins within the mushrooms can cause hallucinogens, abnormal behaviour, increased heart rate and seizures. Unfortunately, mushroom poisoning can sometimes show no signs, until it’s too late”.